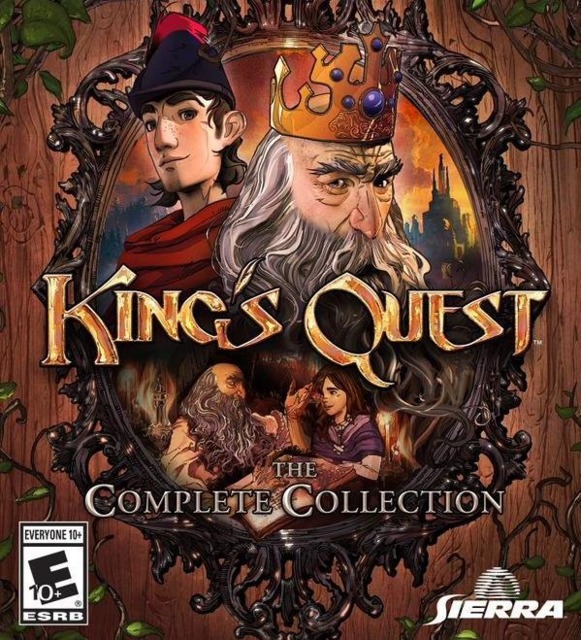 Produced by The Odd Gentlemen and released under the revived Sierra label, King's Quest is a re-imagined take on the original series.
Xbox 360 Games Store PlayStation Network (PS3)

King's Quest is the ninth in the King's Quest series, and is an episodic game in five chapters. It is not a continuation or a remake of the previous games, but a re-imagining that draws inspiration from the previous games.The game is the third game published by the recently revived publisher Sierra.

The game can be bought by either buying the first episode and afterwards a season pass or a a complete collection including all episodes, which is set to feature an exclusive epilogue.

There have been a lot of attempts of making a new King's Quest game since Mask of Eternity, but this is the first official one to actually come out since.

The game's story is told through flashbacks narrated by King Graham of Daventry, who is telling his granddaughter of his life.

The game is a modern take on the classic adventure game genre. There are various puzzles often using different items stored in the player's inventory to solve them, as well as dialogue trees in conversations.

At times the player is presented with a story choice that leads to different outcomes and changes the way King Graham's granddaughter Gwendolyn behaves in cutscenes.

The game also features some action scenes (like shooting a bow and arrow or sneaking past obstacles) and a few quick time events.

Various instant death scenes, a staple of the King's Quest series, make a return in the game too. The "deaths" are always alluded to never have actually taken place by Graham's narration.

An aged King Graham tells his young granddaughter Gwendolyn of all his greatest adventures.

Chapter 1: A Knight to Remember

The first story tells how Graham, then a knight, retrieved the famous Magic Mirror, which eventually led to him becoming king, from a dragon's cave.

The second story jumps back in time and tells how a very young Graham tried to become a Knight of Daventry in the first place, by taking place in a Knight Tournament. Graham has to beat various famous knights from all around the land in competitions of strength, speed and wit to accomplish this deed.

In the present time, Gwendolyn meets her slightly, arrogant, older cousin Gart and tells him that she will take part in the same fencing tournament held in the castle as him. Between listening to her grandfather's stories she trains for the tournament and eventually winds up fighting Gart.

Chapter 2: Rubble Without a Cause

Back to the Future: The Game The Walking Dead The Wolf Among Us Tales of Monkey Island Life Is Strange Tales from the Borderlands Game of Thrones: A Telltale Game Series The Walking Dead: Season Two