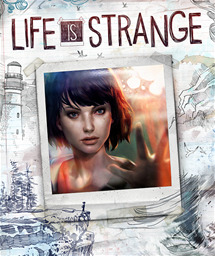 An episodic adventure game based around time manipulation from Remember Me developers DONTNOD.

Players take control of Max Caulfield, an 18-year-old girl who has just returned to her home town of Arcadia Bay in Oregon to attend the Blackwell Academy. Her dream is to one day become a famous photographer, but her awkward nature and poor self-confidence often gets in the way of this dream. After a strange dream in class, Max finds that she can suddenly control time in short bursts, rewinding to alter events and fix problems that appear in her life. She quickly gets wrapped up with dangerous preppies, a missing girl named Rachel Amber, and old friend Chloe Price who has desperate ambitions. Using her new powers, Max must try to get a grip on her quickly changing life.

Life Is Strange plays like a combination of gameplay elements from Remember Me and a typical modern adventure game. The player moves around the environment to talk with other character, collect items for objectives, and inspect various items to get Max's views on them. At any time, the player can rewind a short amount of time, allowing choices to be redone or certain events to be prevented. Any information learned or items collected are retained through rewinds, giving the player an opportunity to avoid any potential consequences as a result. Choice plays a big role at certain moments, promising "consequences" that are likely to affect future episodes of the game.

18-year-old Max Caulfield leaves her family in Seattle to study at Blackwell Academy in her hometown Arcadia Bay, Oregon. During a lesson, she experiences a vivid nightmare. After that she discovers her ability to reverse time and saves her former best friend Chloe from being shot after a fight with fellow student Nathan.

Chloe and Max bond further as Chloe convinces her to experiment with the newly gained power. Meanwhile, Max attempts to help depressed Kate Marsh, who has fallen victim to bullying due to a viral video of her intoxicated at a Vortex Club party.

Max and Chloe's investigation into Rachel Amber's disappearance lead them to break into Blackwell Academy after dark, to search for answers. Secrets will be uncovered and Max will find another use for her power.

The truth about Rachel Amber's disappearance comes to light as Max and Chloe uncover the mystery of the "dark room."

The season finale. Max desperately seeks a way to fix the problems her gift has caused, but how much will she be willing to sacrifice to put things right?

Photography plays an important role in the game. Beside the mandatory, story-relevant photos the player has the possibility to take 10 optional photos in each episode using Max's retro Polaroid instant camera.

The original score was composed by Syd Matters frontman Jonathan Morali, who also contributed two of the licenced tracks that can be heard throughout the episodes.

When Max is in her dorm room, the player can choose to use her guitar. Depending on the situation, she might play Crosses by José Gonzales or Something Good by alt-J. But if the player chooses to turn on the stereo first, the original recording will play and Max will strum along with the song.

On July 21, 2016, DONTNOD Entertainment announced that episode 1 is now available for free for all platforms