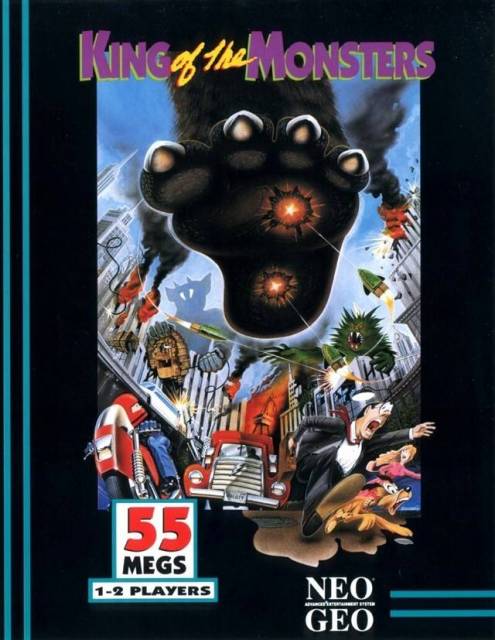 King of the Monsters

Giant beasts demolish Japanese cities while grappling each other in this kaiju-themed arcade game by SNK.

King of the Monsters is a kaiju-themed belt-scrolling fighting/wrestling hybrid game developed and released by SNK for arcades (running Neo Geo MVS hardware) on February 25, 1991.

Set in cities throughout near-future Japan (circa 1996), players pick one of six giant monsters (resembling famous kaiju, including Godzilla and King Kong) and attempt to subdue other giants in various destructible environments. Most of the fighting mechanics in the game resemble those in professional wrestling games (including a grappling system and the use of pinfalls to win). Similar to beat-'em-ups, defeated players can re-join the match by continuing, restoring their stamina while not restoring the enemy's.

Unlike most fighting games, a second player cannot interrupt a single-player game for a versus match. Instead, joining in immediately turns the game into a two-on-two co-operative mode. Before the game starts, players can optionally change it into a single one-on-one versus match (where the losing player can restore their stamina by continuing).

It was released for the Neo Geo AES for all regions during their respective launch dates. It was also ported to the Super Nintendo Entertainment System in 1992 and the Sega Genesis in 1993, both by TAKARA. Unlike most Neo Geo games of the era, this game did not receive a port to the Neo Geo CD.

The game would eventually be followed up with a sequel, titled King of the Monsters 2: The Next Thing, which adds more elements from beat-'em-ups. It's also a likely inspiration for the Game Boy Advance game Godzilla: Domination!