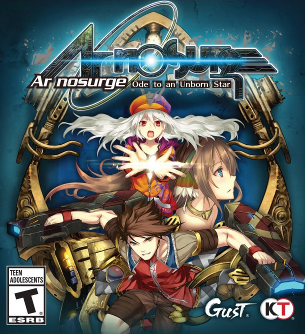 Ar Nosurge: Ode to an Unborn Star is a sci-fi role-playing game that was released by Gust in Japan for the PlayStation 3 in March of 2014 and was later ported to the PlayStation Vita in October. The game is a direct sequel to Ciel no Surge and also serves as a prequel to the Ar Tonelico series. Koei Tecmo America published Ar Nosurge in the United States on September 23, 2014 and released the Vita port in 2015 as a digital title with NIS America printing a limited edition physical copy.