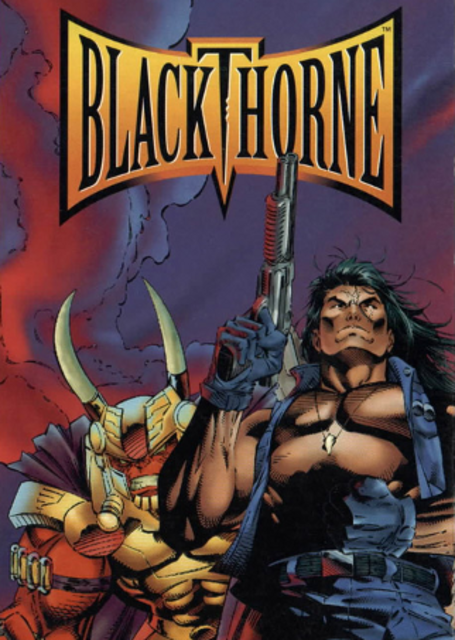 Shoot everything in your quest to rightfully claim the throne of Androth in this early Blizzard platformer.
Game Boy Advance

BlackThorne is a 1994 action platformer, developed by Blizzard and published by Interplay. The player is put in control of the game's protagonist, Kyle "BlackThorne" Vlaros as he progresses through the games many levels, attempting to thwart the evil Sarlac.

The game was initially released in 1994 for both the Super Nintendo and the PC. It was then later ported to Sega 32X, Mac, and Game Boy Advance. In 2013, the game was released as a free PC download via Battle.net.

The games levels are large and winding, and are filled with puzzles and enemies. Kyle will have to run, jump and climb in order to get around each level, utilizing a number of weapons and items. The game's control is generally slower than most platformers. The player loses a lot of control when they run, and running is best for long, straight corridors and long jumps. For the most part, the player will progress slowly, climbing up ledges and making tough jumps.

Combat in BlackThorne is slow and strategic. The player wields a shotgun with unlimited ammo, and can use grenades in combat as well, though these are best used to destroy doors. When an enemy is encountered, they will often back up and wait before attacking. Kyle can also back up to avoid their shots. Enemies will reload and move after shooting, which is when the player should take advantage and eliminate their foe.

Items play a large role in BlackThorne. They are numerous, and are used in many instances for puzzles and clearing obstacles. There are also a number of interactive items in the environment that Kyle must use.

Flashback: The Quest for Identity Prince of Persia Alien Rampage Barbarian Lester the Unlikely Out of This World Fade to Black Duke Nukem: Manhattan Project The War of the Worlds Deadlight The Hive Zorro Tomb Raider Bermuda Syndrome Iji