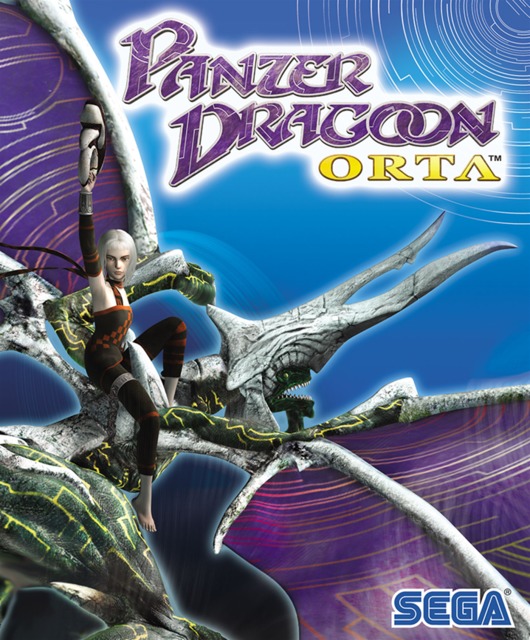 Panzer Dragoon Orta is a rail shooter for the original Xbox in which the player rides a dragon. The game is the fourth in the Panzer Dragoon series which began on the Sega Saturn.

Panzer Dragoon Orta is the fourth official game in the Panzer Dragoon Franchise. It was developed by Smilebit for the original Xbox and was released in Japan in 2002 and in North America and Europe in 2003.

The story takes place several decades after Panzer Dragoon Saga. The Empire has once again risen to power and using the technology of a forgotten civilization has created the Dragonmares, a group of genetically engineered dragons. The player assumes the role of Orta, a young white-haired girl who has spent her entire life imprisoned by a group known as the Seekers. Unaware of her origins, Orta lives out her days alone in a stone tower overlooking the city until one night the Empire and its Dragonmares attack the city and head for Orta's tower. Before she can be captured, Orta is mysteriously saved by the legendary dragon, which returns once again from the shadows of history. Fleeing the city upon the dragon's back, Orta sets off on her voyage of discovery determined to discover the truth about herself and her new companion.

The game also features an unlockable bonus quest called "Imperial Boy" which follows the story of Iva, a young imperial soldier in training out to avenge his father's death at the hands of a dragon (the same dragon Orta rides).

The gameplay is similar to the rail shooter gameplay first two entries in the Panzer Dragoon series, Panzer Dragoon and Panzer Dragoon II: Zwei. Orta rides on the back of a flying dragon while the player moves an on-screen cursor which aims attacks and slightly adjusts the position of the dragon. The dragon has three different forms which may switched between at any time. Additionally, the player has limited control of the dragon's position on screen and has the ability to temporarily accelerate or decelerate the dragon.

As with other rail shooters, the dragon's movement is mostly predetermined. However, the player has the ability to steer the dragon within the screen to evade enemy attacks and avoid collisions.

Enemies may attack from all sides. The L and R triggers on the Xbox controller are used to rotate the camera in 90 degree increments to place enemies on the screen so that the player may attack them. An on-screen radar is provided to indicate the positions of enemies surrounding the dragon and Orta.

The player only uses two weapons: Orta's gun and the dragon's homing laser. Both weapons are aimed using the on-screen cursor and have unlimited ammo. The gun is fired by tapping the A button on the Xbox controller. The homing laser is fired by holding down the A button, moving the cursor over enemies to lock-on, and then releasing the A button to fire the lasers. The number of enemies which may be locked-on and the power of each attack is dependent on the dragons's form.

Attacking enemies fills up the Berserk Gauge which when filled allows for a Berserk attack to be released with the Black or White button. The type of Berserk attack is also dependent on the dragon's form.

The dragon may morph between one of three forms at any time which are toggled with the Y button. Each form has different strengths and weaknesses.

Defeated enemies release "Gene Bases" that increase the dragon's levels. Higher levels provide increased attack strength and increased Life Gauge. Each morph form levels up independently; Gene Bases only count towards the form of dragon that acquires them. The maximum level for any dragon form is level 5. The appearance of the Heavy Wing and Glide Wing forms changes with level. The appearance of the Base Wing form is unchanged by level.

The main game consists of 10 episodes which are advanced linearly (although individual episodes may feature alternate paths). Each episode ends in a boss battle. After completion of an episode, a result screen is presented in which the player's performance is graded (S, A, B, C, D) in several categories and an overall score.