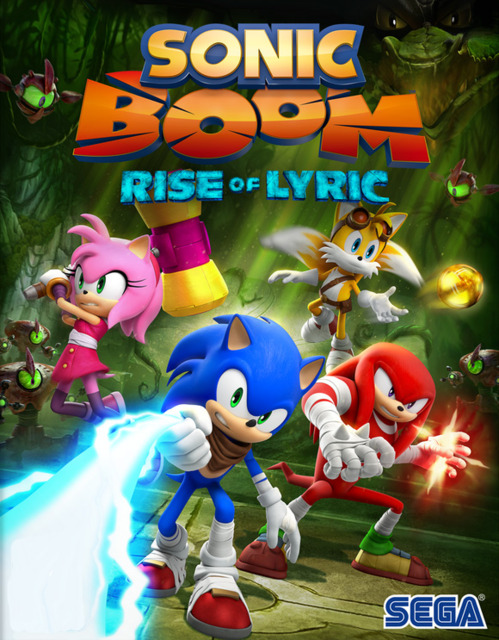 A Wii U tie-in to the "Sonic Boom" spin-off television series, following Sonic the Hedgehog and his three chatty friends as they work together to foil the plans of an ancient snake-like monster.
Wii U

Sonic Boom: Rise of Lyric (known in Japan as Sonic Toon: Taiko no Hihou, the sub-title loosely translating to "Ancient Treasure") is a 3D action-adventure platformer developed by Big Red Button (under supervision by Sonic Team) and published by Sega for the Wii U on November 11, 2014 in North America, on November 21, 2014 in Europe, and on December 18, 2014 in Japan.

Alongside Sonic Boom: Shattered Crystal for the Nintendo 3DS, the game was built for the Sonic Boom French-American CGI-animated television series (a spin-off of the main Sonic the Hedgehog game series).

The game follows a rag-tag group of heroes (Sonic the Hedgehog, Miles "Tails" Prower, Knuckles the Echidna, and Amy Rose) who must stop the plans of a powerful snake-like villain (Lyric) they accidentally released from an ancient tomb. Players can switch between the four heroes, each with their own special abilities.

The game was built in CryEngine 3, is the first game developed by Big Red Button (founded by two Naughty Dog vets), and supports local two-player co-op via Two-Screen Multiplayer.