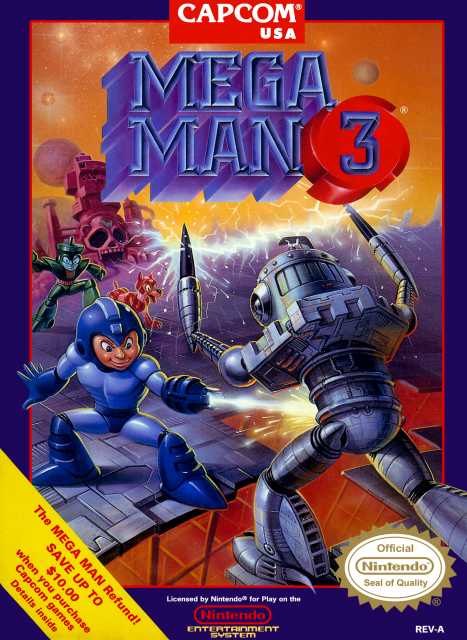 When a peacekeeping effort between Dr. Light and Dr. Wily go haywire, it's up to Mega Man (who now has the ability to slide under obstacles) and his robotic companion Rush to traverse the universe and defeat the Robot Masters in the third installment of the Mega Man series.

Mega Man 3 (known in-game as Mega Man III, not to be confused with the PC and Game Boy games of similar names, and known in Japan as Rockman 3: Dr. Wily no Saigo!?, which loosely translates to "Rockman 3: The End of Dr. Wily!?") is a side-scrolling action-platformer developed and published by Capcom for the Nintendo Entertainment System on September 28, 1990 (in Japan), November 1990 (in North America) and sometime in 1992 (in Europe).

The third installment of the original Mega Man series (and the sequel to Mega Man 2), Mega Man 3 expands on the series by adding a new "sliding" manuever (allowing Mega Man to to slide under enemy attacks and certain barriers) and a new companion for Mega Man (his dog Rush, who has unlockable abilities that replace the transportation tools from the previous game).

Set in the year 20XX, the game takes place shortly after the events of Mega Man 2 (in which the humanoid robot hero Mega Man defeats the evil roboticist Dr. Wily a second time). Dr. Wily, now reformed, works with Dr. Light on a giant peace-keeping robot (named "Gamma") that would be powered by eight energy crystals scattered throughout the universe. When the eight Robot Masters, built by both roboticists, go berserk and refuse to give the crystals, it's up to Mega Man (with his robotic dog, Rush) to travel around uncharted planets, defeat the Robot Masters, and collect the crystals (while, along the way, encountering a mysterious figure).

Mega Man 3 retains the gameplay formula the Mega Man games are so well known for. The player can choose to take on the eight robot masters in any order they choose. Each robot master is weak to another's special weapon, and it is up to the player to experiment and discover what will best work against his foes. Mega Man begins with only his mega buster weapon, but as he progresses, he will earn new weapons from each robot master that he defeats. Mega Man 3 is also known for the addition of the slide move, which became a staple of later iterations. The game also introduces a new Rush power, the Rush Marine, which allows Mega Man to travel through water.

Each stage in the game employs a variety of new obstacles which Mega Man must conquer. These include low walls that must be slid under, tricky jumps, and the infamous disappearing block sections.

Mega Man 3 is host to an interesting glitch in which Mega Man can leap the height of the entire screen if the player plugged in a second NES controller and held down RIGHT on its d-pad. The actual jumping ability was probably a hidden cheat; the actual glitch comes in handy when the player dies by falling into a bottomless pit. With proper timing, players could then attempt to jump out of the pit using the cheat, sending Mega Man back into the playing field with a completely empty life bar. The result is an invincible Mega Man; while he still reels back from contact, he is able to take an infinite amount of damage in this condition. Two downsides: (a) Mega Man can no longer fire off his Mega buster, and must make use of his enemies' weaponry (and if he is out of "ammo" in this condition, he's practically useless on the offensive end); (b) Mega Man is still vulnerable to spikes. Also, grabbing a life powerup while in this state will fill up some of Mega Man's energy bar, making him once again vulnerable to attacks (and possibly very near death, if a small life powerup was picked up).

Below are the Robot Masters unique to Mega Man 3. Like all classic Mega Man games, Mega Man gains each robot master's weapon when they are defeated. In an oddity for the series, the vulnerability relationships in Mega Man 3 aren't entirely circular: That is, there is not one solitary sequence for defeating the robot masters from beginning to end with the luxury of having the appropriate weapon (past the first fight). In other words, at some point even after the first boss fight, players will have to walk into a robot master encounter with a sub-optimal weapon. Note that in Dr. Wily's castle, players encounter 8 additional Robot Masters from Mega Man 2 but they do not have full stages, nor do they have useable weapons.

Main attacks: Top Man will throw out multiple tops that hover in the air before zoning in on Mega Man in a straight line. He will then spin (pirouette, really) and propel himself across the screen at Mega Man.

Weapon: Top Spin - Used by jumping and using the weapon in mid air. Mega Man will spin like a top and damage any enemy he hits.

Main attacks: Hard Man will throw out consecutive Hard Knuckles that angle towards Mega Man. He will also leap high into the air; upon crashing down, he will cause an enormous quake that will stun Mega Man if he's on the ground when it occurs.

Main attacks: Spark Man will leap around and try to collide with Mega Man. He also generates a large spark and tosses it in Mega Man's general direction. His lair is not flat, making it difficult to avoid him.

Weapon: Spark Shock - Fires a large ball of electricity that stuns most enemies. Easy to use because of the large size of the projectiles.

Main attacks: Gemini Man will split in two, and the pair will work in a quasi-juggling pattern: one running along the ground from left to right, trying to collide with Mega Man, and one leaping in the air from right to left. When the airborne clone hits the ground, the two exchange roles. The Gemini Man clones will also eventually merge and the one will fire his reflective Gemini Laser.

Weapon: Gemini Laser - Fires a blue laser that can bounce off walls. Can continue after hitting an opponent and hit more than once.

Main attacks: Needle Man leaps high in the air and fires off consecutive needles at different points during his descent. He will also thrust his needle-ridden "hair" Mega Man's way.

Weapon: Needle Cannon - Fire a barrage of needles. Can rapid fire by holding down the fire button.

Main attacks: Magnet Man leaps high in the air and fires off consecutive magnet missiles, which take a right angle downwards depending on where Mega Man is standing at the time. He will also attempt to pull Mega Man into his magnetic field to cause massive damage.

Weapon: Magnet Missiles - Shoots a magnet that can move up or down to "track" enemies to a certain degree.

Main attacks: Shadow Man uses a combination of short hops, high jumps, and slides to collide with Mega Man. He will also throw out his Shadow Blades at seemingly random intervals.

Weapon: Shadow Blade - Shoots a ninja star that goes straight but boomerangs back. Limited range, but can be fired up or down as well as forwards.

Main attacks: Snake Man will fire off several Search Snakes that travels along the ground and walls, making it difficult for Mega Man to maneuver around Snake Man's angular lair. At the same time, Snake Man will make use of his lair to jump around and attempt to collide with Mega Man.

Weapon: Search Snake - Shoots a snake-like projectile that travels along the floor. Can even move up or down walls.

In addition to the Robot Master's weapons, Mega Man can summon the robotic dog, "Rush". Rush can perform a variety of tasks to aid Mega Man, effectively taking the place of the items from previous Mega Man games.