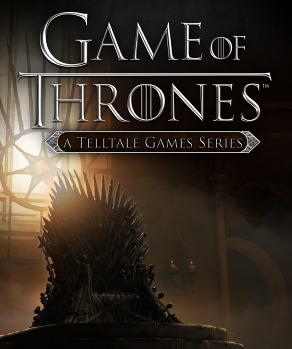 Based on the epic-fantasy television series of the same name, Game of Thrones is an episodic adventure game that tells the story of House Forrester, whose fate is threatened by the War of the Five Kings.

Game of Thrones (not to be confused with the 2012 action RPG of the same name) is a six-part epic-fantasy point-and-click adventure game developed and published digitally by Telltale for the Xbox One, PlayStation 4, Xbox 360, (via Xbox Live Arcade), PlayStation 3 (via PlayStation Network), PC, Mac, and most iOS and Android devices. Episodes were periodically released between December 2, 2014 and November 17, 2015.

Set during Seasons 3 and 4 of the television series of the same name (which itself is an adaptation of the A Song of Ice and Fire novels), the story revolves around House Forrester, a family that controls the valuable Ironwood forest in the north-east corner of Westeros (in the secluded fortress of Ironrath). Due to the importance of Ironwood and the fall of the house's Lord, the Forresters (and their allies) are targeted by political rivals both in Westeros and abroad and must engage in militaristic and diplomatic battles to survive. Along with a comic book style similar to Telltale's other games, the game includes some prominent characters from the novels and television series as supporting characters, each with the likeness and voice of their actors from the television series.

The fifth of Telltale's "tailored story" set of games (made famous by The Walking Dead), the bulk of this adventure game relies on making decisions through actions and timed conversation trees, complete with branching consequences that tailor the player's story to the pressured choices they are forced to make. Players also engage in action sequences (using a series of quick time events). Similar to Tales from the Borderlands, players switch between different protagonists throughout each episode (shifting the story to multiple storylines).

The game was re-released in retail form for the Xbox One, PlayStation 4, Xbox 360, PlayStation 3, and PC on November 17, 2015, in conjunction with the game's final episode.

At the Red Wedding, the Stark bannerman Lord Gregor Forrester and his heir Rodrik are killed by the Freys. Lord Forrester's squire Gared is sent to the Wall to escape the revenge of the ascendant Boltons, and his daughter Mira, a lady-in-waiting for the King's bride Margaery Tyrell, looks for support for her family at the court in King's Landing.

A cart of the bodies from the massacre at the Twins is brought to Ironrath, amongst them is the body of Lord Gregor and the injured but still-living Rodrik. Gared arrives at the wall, where he begins his training such that he may become a ranger of the Night's Watch, hence fufilling due his duty to House Forrester by protecting the North Grove. Intrigue is rife in the King's Landing, with Mira still searching for support from the Crown - and Mira faces the wroth of a yet unknown conspirator. In distant Yunkai, three days after the Daenarys' liberation, Asher is visited by Malcolm Branfield, sent by his mother to bring him back to Ironrath.

Asher sets off for Meereen in hope of finding an army to lead in the fight against the House Whitehill. Meanwhile, in King's Landing, Mira, caught in the city's political turmoil following the recent events, is still at work finding a powerful ally to aid her family in their struggle. In Ironrath, the Whitehill takeover, with Ludd Whitehill and his son Gryff Whitehill at its helm, drags on. At his father's command, Gryff, set to prove himself worthy of handling a settlement of his own, pressures Rodrik and his house to succumb to Whitehill rule. At the Wall, Gared finds out that he must head north in order to assure his family's safety.

In hopes of reclaiming Ironrath, Rodrik allies with Elaena and Arthur Glenmore who share his hatred of the Whitehills. Together, they devise a plan to inconspicuously take out Gryff. In King's Landing, now a city in turmoil following the murder of King Joffrey, Mira attends a banquet hoping to find what the Whitehills plan to do to defeat her house. At the Wall, Gared is imprisoned following his actions; but soon escapes and heads for the North Grove, facing the wilding hunters along the way. In Essos, outside slave city of Meereen, Asher, Beskha and Malcolm meet Daenerys who offers them an army in exchange for the guide through Meereen.

Rodrik's alliance with House Glenmore, and his defiance of the Whitehills, has drawn the ire of Ramsay Snow. Far across the Narrow Sea in Essos, with Meereen now a free city, Asher is close to securing the army he desperately needs to return home, and save his family. In King's Landing, Mira's activities at Tommen's coronation have not escaped the attention of Margaery Tyrell, and Cersei has realized that the handmaiden may prove useful in her political games. Finally, beyond the Wall, Gared's unlikely allies are reluctant to help in the search for the North Grove.

With House Whitehill tightening its grip on Ironrath at the behest of Ramsay Bolton, the remaining Forresters must give their all to save the family, whether through diplomacy, subterfuge, or violent force. In the frozen wilds beyond The Wall, Gared learns the secrets of the mysterious North Grove, and Mira discovers that political games in a King's Landing controlled by Cersei Lannister often involve the highest stakes of all.