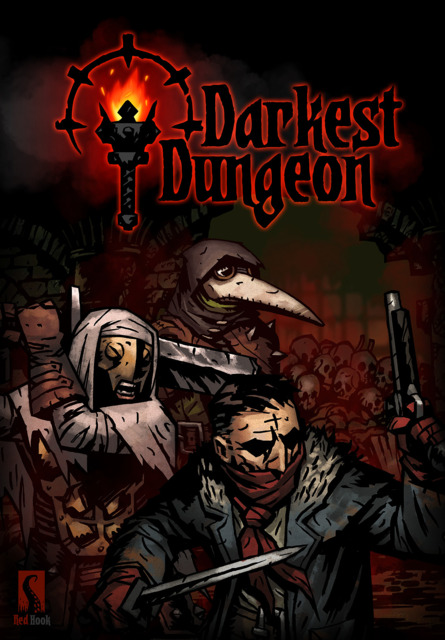 A dungeon crawler that seeks to weigh the psychological effects of delving into hellish monster abodes, not just the damage to HP. Team chemistry means more than just skill synergy.

Darkest Dungeon is, categorically, a turn-based role playing game. However, there are several systems in the game that shakes the foundation of traditional RPGs. The most notable of these is the stress level. a.k.a the sanity meter. which affects the adventurer's stats and actions depending on how stressed they are. It turns out that constant dungeon raiding can make even the best of heroes crack under pressure.

The game was available as an Early Access title from Steam. It fully released for PC/MAC on January 19th, 2016.

The game revolves around selecting a party of four in the town screen and then delving into a dungeon, of which there are five.

Crowd control specialist. He is one of the classes that can disrupt enemy positioning via his hook ability which can drag enemies in the back to the front. He is also notable for marking and stunning enemies.

Typical healer/support class. She is one of the classes that has a heal spell and the only one that has party heal. She is also notable for having several support skills centered around dungeon lighting.

DPS or support class. He is the only class that has a party buff via his lute playing. He is also notable for having high critical chance and a skill that re-positions himself to the front while also attacking.

Primarily a tank class. He is one of the classes that prefers to be up front because his skills are limited to hitting front row enemies. He is notable for having high damage but poor accuracy.

Tank/support class. Unlike the Leper, the Crusader can re-position himself to the front while attacking at the same time. He is also notable for having skills centered around dungeon lighting.

DPS class. Equipped with guns, he prefers to deal damage from the back. He is notable for having a skill that re-positions himself to the back if he ever finds himself in the front.

DPS/support class. She uses knives and a pickaxe to deal damage. She is notable for having skills that raises her accuracy while attacking. She is also the best class that can deal with traps.

Melee DPS. All her abilities are focused on killing the enemy either as direct damage or bleeding them out. She is notable for having high damage abilities that are associated with debuffs.

DPS/support class. Her abilities are centered around the theme of blight. Blight along with bleed are debuffs that can stack on one enemy. She is therefore very adept at dealing with enemies with high HP.

Healer/support class. Along with the vestal, he is one of the classes that can heal a party member. Although more powerful it heals at random and is also associated with a chance to bleed. Has several support skills and one that re-positions enemies.

Quirks are random character traits that every hero comes with. Newly recruited heroes typically come with 2-3 quirks, not all of which are necessarily beneficial. As they delve into dungeons and gain more experience, heroes may be granted a random quirk upon their exit depending on the player's performance.

Most of the game is spent in the town screen where the player can interact with various buildings. The chapel and the bar, for example, are equipped with stress reducing services such as meditation and gambling. As players progresses through the game, they can upgrade any of these buildings with heirlooms collected throughout their forays into the dungeons.

There are five dungeons: the Ruins, Warrens, Weald, and Cove dungeons are used to prepare your heroes for the ultimate challenge in the last dungeon, the Darkest Dungeon. Enemies and difficulty vary by which dungeon you set out to explore. As the player progresses through the game, the variety of quests will open up and eventually, the boss' dungeon level will be unlocked.

Much like the heroes who venture in the dungeons, the enemies residing within it are subject to the restrictions the game designer have established. As such, there can only be as many as four enemies in one encounter. They will occupy the four position slots allocated on the screen opposite the four heroes to the left.

They are equipped with various skills that will either do damage to the heroes' HP or to the their mental stability. Consequently, a group of heroes with full health does not necessarily equate to a winning team.