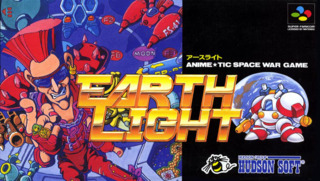 A turn-based strategy game with a sci-fi/mecha theme from Hudson Soft. Many of the same developers behind Military Madness worked on this game.

Earth Light is a strategy game for the Super Famicom that features mechs fighting each other in various conflicts on land, in air and in space. Though superficially similar to existing Gundam strategy games, Earth Light is unaffiliated with that franchise (coincidentally enough, a later 1999/2000 Gundam movie had the subtitle "Earth Light"). As with earlier strategy games from Hudson, like Military Madness, the action takes place on a hexagonal grid, with entire sides taking turns moving into position and engaging enemy units within range. The game also takes a leaf from Advance Wars's book by painting the sides in vibrant colors to help make them stand out from one another.