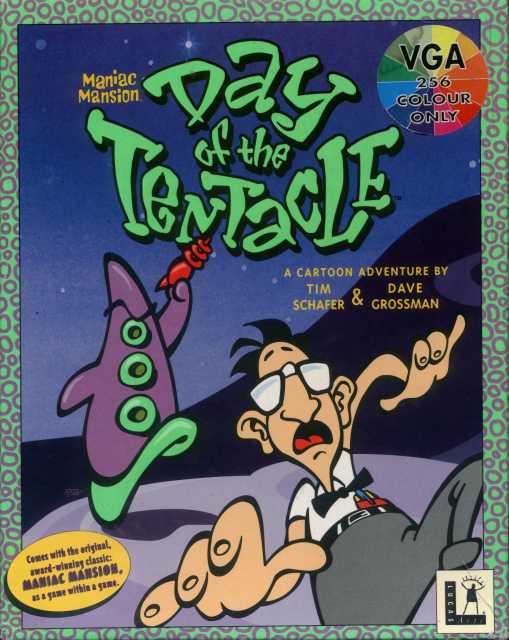 Maniac Mansion: Day of the Tentacle

A point-and-click adventure game that follows Bernard Bernoulli, Laverne, and Hoagie as they try to prevent Purple Tentacle from taking over the world.

As in other post Loom LucasArts adventure games it is impossible for the player to die or get into an unsolvable solution. The game runs on the sixth version of the SCUMM engine, which requires the player to select actions or items from the bottom of the screen and then select a point of interest in the world to interact with.

Day of the Tentacle begins with Green and Purple Tentacle standing next to a stream of contaminated water behind Doctor Fred's mansion. After drinking some of the contaminated water, Purple Tentacle gains a pair of arms and a vastly-increased intelligence, and resolves to take over the world. Green manages to inform his friend, Bernard (who was one of many possible protagonists in the original game), who immediately sets out for the mansion with friends Laverne and Hoagie in tow.

Doctor Fred plans to send the three of them back in time to yesterday to turn off the contamination machine and prevent Purple's mutation from occurring, but each of the three characters become trapped in a different time period due to a fake diamond-related mishap. Here is where the majority of the game takes place, with Hoagie trapped in colonial times, on the day of the signing of the Declaration of Independence; Bernard stuck in the present; and Laverne thrown in the distant future, where Purple has succeeded in conquering the world, which is now run by intelligent tentacles who keep humans as pets. In order to save the world Bernard, Laverne, and Hoagie must interchange items and find the parts to fix the time machine in order to return to the present time and stop Purple Tentacle.

In The Secret of Monkey Island: Special Edition, an intriguing Easter egg led many to speculate that a special edition of this timeless classic may be in the works. On Monkey Island, in front of the Great Monkey Head, a tentacle statue stands in place of the "Sam and Max" statue featured in the original game. Purple Tentacle also replaced a Max costume in Lechuck's Revenge: Special Edition.

On December 6, 2014, Day of The Tentacle Remastered was announced for release on PS4, Vita, PC, Mac, and Linux. The release date of March 22, 2016 was announced for the PC version via Gog.com. The remastered version of the game includes higher-resolution graphics, remastered audio, unlockable concept art, and developer commentary.