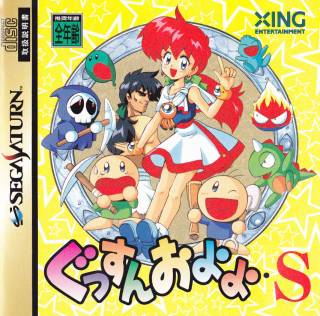 Originating as an arcade title but spanning many consoles, Gusson Oyoyo combines the traditional falling block puzzle of Tetris with a wandering Lemming-like character. Build a path to the exit while keeping Gussun or Oyoyo safe from enemies or the player's own negligence.

Gussun Oyoyo is a puzzle game developed by Irem for the Arcades in 1993. In the following three years, it saw several ports (and a sequel) for consoles. These ports were handled by different developers, and are subtly different interpretations of Irem's source. Irem themselves would eventually produce a PS1 sequel in 1996: Gussun Paradise, known in Europe as Yoyo's Puzzle Park.

The core gameplay of the series is to help Gussun and his brother Oyoyo (Vic and Vinnie respectively in Risky Challenge) escape a flooding stage by building a stairway with Tetris blocks. The goal is to reach the ceiling before the water level drowns the pair. Gussun and Oyoyo move independently based on their AI, similar to the titular rodents of Lemmings, and the player needs to anticipate their AI pathing and their habit of occasionally freaking out whenever scary things happen.

In addition, the player can often choose between Emily and George as their "cheerleader". Emily is a young woman who frequently changes costumes while George (originally Yousame) is a buff bodybuilder. Later ports removed George.

Gussun Oyoyo was originally released in the Arcades. This version was developed and published by Irem. It saw a US release as Risky Challenge. It's perhaps best known for its intense difficulty curve.

Gussun Oyoyo is a 1995 PlayStation port developed by Xing which enhanced the graphics and music, and also changed the latter half of the game's stages. This version is even tougher than the original Arcade version.

Gussun Oyoyo S is a 1996 Saturn port also developed by Xing and based on their PlayStation game. It is largely identical but the difficulty has been lessened and it received improved cutscenes and other enhancements. This version was ported back to the PlayStation in 2000.

Super Gussun Oyoyo is a 1995 SNES port handled by Banpresto and developed by Kan's. Though graphically and musically inferior to the PlayStation port, due largely to the limited technology of the then-aged SNES, it added multiple new features including a walking speed toggle and a two-player versus mode. It also received a sequel: Super Gussun Oyoyo 2.

Zoku Gussun Oyoyo is a 1996 PlayStation and Saturn release published by Banpresto and developed by Irem themselves that is a graphically enhanced version of Kan's SNES output.