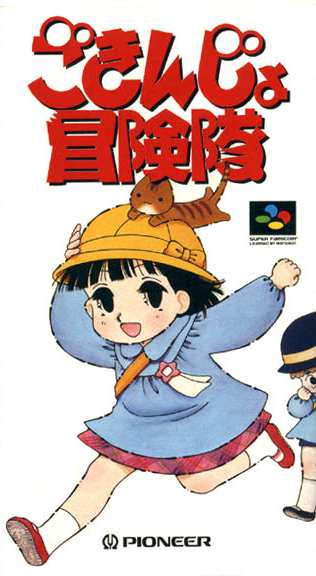 A Super Famicom RPG about a kindergartner who is tasked by God to rid her neighborhood of evil youkai.

Gokinjo Boukentai ("Neighborhood Adventure Troop") is a Super Famicom RPG featuring a party of younger children as they fight youkai around the neighborhood under their parents' noses.

The young heroine, Mana, is tasked by "God" to save her town, and she starts recruiting other kids her same age to help out. They meet in a cave not too far from her home, from which the player can create parties and use as a hub. Each day is presented as its own chapter, and invariably conclude with Mana's mother dragging her back home after a boss has been defeated. Mana's cat and frequent sidekick, Yuzu, acts as narrator between days/chapters.

With its young cast and everyday slice-of-life comedic aesthetic, the game's been likened to the Mother/EarthBound series by critics. It's also intended for beginners: there's no penalty for losing a battle, and the player is offered the chance to restart the fight with a boost to one of their combat-related stats.