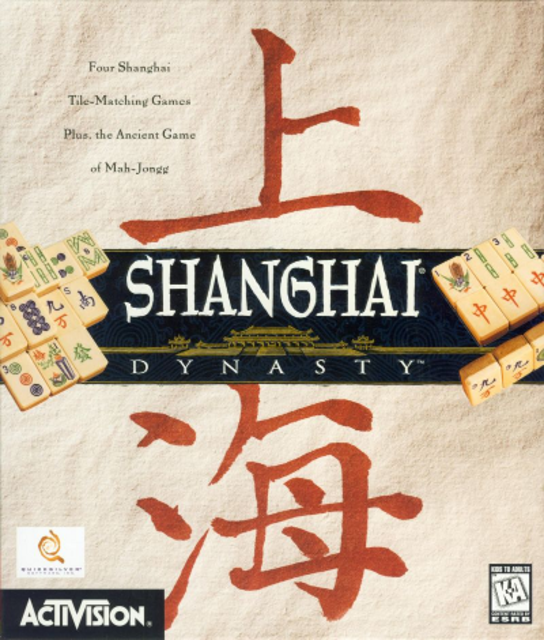 The sequel to Shanghai: Great Moments, featuring a variety of mahjong solitaire game modes, the addition of traditional mahjong, and online multiplayer support.

Shanghai: Dynasty is a mahjong solitaire / mahjong game developed by Quicksilver Software and published by Activision for Windows PCs and Apple Macintosh computers on November 30, 1997.

The sequel to the 1995 game Shanghai: Great Moments, Dynasty features a new set of puzzle layouts and tile appearances, as well as a new of six game modes (including traditional mahjong). These modes are:

Dynasty, Pandamonium, and Mah-Jongg modes are intended to be played online (a first in the series) through either LAN, modem, or Internet (the latter through the ActivLink service). They can be played against AI opponents.

It was later ported by Success to both the Sega Dreamcast (on March 16, 2000) and the Sony PlayStation (on March 22, 2001, as part of their SuperLite 1500 Series of budget games). Both releases were published exclusively in Japan by SUNSOFT. While none of these versions have online multiplayer (nor the Shanghai for Kids mode), they include full-3D tile rendering. The PS1 version also eschews the Pandamonium mode and limits Dynasty mode to two players. The PS1 version was later digitally re-released via PlayStation Network (as an Original PlayStation Archives title) February 22, 2007.

Matching a Joker tile while the "Power Tiles" option is on gives one of seven effects at random:

While some of them can be detrimental to the player's opponents, the Back Three Pairs, Scramble, and Shuffle effects can also benefit them if they are stuck.

Traditional mahjong. Players can play both "Chinese" and "Western" rules.

The "Chinese" variant is based on the Old Hong Kong Mahjong rules, and a variety of rules can be enabled or disabled:

The "Western" variant is based on American Mahjong rules, including some changes: