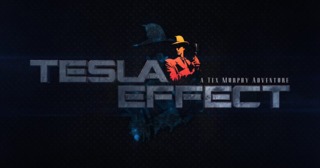 Funded through Kickstarter, Tesla Effect is a new entry in the series of Tex Murphy point and click adventure games created by Chris Jones and Aaron Conners.

Tesla Effect: A Tex Murphy Adventure is a point & click adventure game developed by Big Finish Games for the PC and Mac. Tesla Effect is the sixth installment in the Tex Murphy adventure game series. The game starts with Tex waking unconscious in the fire escape of his office building. He soon realizes that he can not remember anything from the last seven years of his life. The player must help Tex retrace his steps, solve murders and discover hidden agendas revolving around the lost technologies of Nikola Tesla in order to regain his memories and stop a terrifying future. The game features full-motion video cut-scenes and interactive dialogue that results in multiple endings depending on your choices.

Big Finish Games launched a Kickstarter on May 15, 2012 to fund Tex Murphy - Project Fedora. The Kickstarter was a success and raised $598,104 dollars from 6,963 backers. It was later announced in July of 2013 that Project Fedora was named Tesla Effect. The game was finally released to backers on May 7, 2014 and became available the following day from online game retailers.