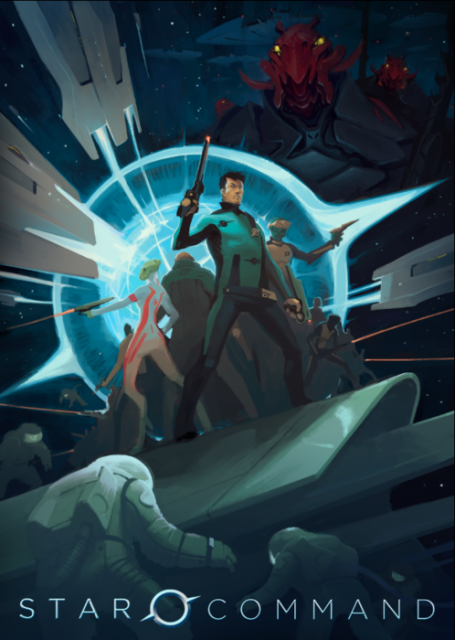 Star Command is a space simulation game for iOS, Android, Mac and PC. The player takes control of a starship and its crew while trekking around the galaxy completing missions.

Star Command was announced in March 2011 as a mobile release and successfully Kickstarted in October. Later, in August 2012, a second Kickstarter was completed and confirmed PC and Mac releases for the title.

The basics of Star Command are borrowed from both Star Trek and FTL: the skills of your crew members and the functions of the rooms you build aboard your ship are defined by their color code, which is either blue (science), red (weapons) or yellow (engineering). Movement aboard the ship is tile-based while space travel is menu-driven. Similar to XCOM, crew members gain experience and skills, but can be killed and lost permanently.

After a short tutorial mission, the story-driven game begins with the player being wrongfully accused of treason by a galactic federation known as Star Command. From this point the game progresses as an adventure through the solar system where the player will be faced with different enemy encounters as they hop through the cosmos.

Along the way the crew will gain experience, the ship can be customized and upgraded and the captain can adjust events in the game through the selection of different dialog tree options.

The gender, race and appearance of the ships captain can all be modified and over time new races can be unlocked to keep future play throughs feeling unique.

Star Command's main storyline can take 6-8 hours and is played mostly in real-time. Replay-ability is implicit in the design of the game, but remains to be proved.

Star Command has an art style that mixes isometric pixel-based design reminiscent of 16-bit era games with colorful backgrounds which appear hand-drawn and painted. The styles are blended together in an intentionally obscure manner which creates a unique presentation.

Star Command will be released on iOS, Android, Mac and PC. The developers are considering Windows Phone 8 and Linux support as well, but have no official plans to support that.

Although an official release date has not been disclosed by the developers, the game has been released in beta form to selected players and developer updates on facebook and twitter seem to indicate a release in the first half of 2013.

According to the developers, the game will be available on iOS in April 2013, Android a month later and Windows and Mac at some point following. The iOS version of the game will be listed at $2.99.