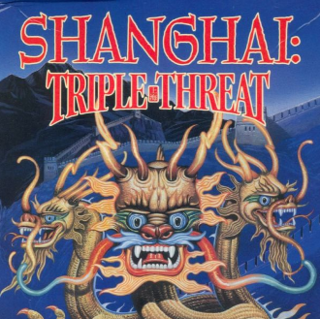 The fourth of Success's arcade entries of the Shanghai series of mahjong solitaire games. Along with classic Shanghai, this game features three additional game modes (two of which are new to the series).

Shanghai: Triple-Threat (known in Japan as both Shanghai: Banri no Choujou and its translation Shanghai: The Great Wall) is a mahjong solitaire game developed by Success and released by SUNSOFT (under license from Activision) for arcades (using Saturn-based Sega ST-V hardware) on August 1994.

The fourth entry in the studio's arcade entries of the Shanghai series, and the sequel to Shanghai III, Triple-Threat features three game modes on top of traditional mahjong solitaire (known as Classic Shanghai):

All modes can be played with three tilesets: traditional mahjong tiles, icons representing the astrological signs and constellations, and icons representing musical instruments and notation. Two players can play any of the three single-player modes co-operatively (competing only for score).

The game is themed after the Great Wall of China, and the game's Classic Shanghai and The Great Wall modes have players traveling along with the historical fortification by completing each stage.

The game received ports to numerous consoles and computers from late 1994 to early 1996, usually exclusive to Japan (with only 3DO and Sega Saturn versions localized to English regions, released by Activision themselves). All ports have both an Arcade Mode and an Original Mode, the latter of which is similar to the home versions of other games in the series.

The game received first-party ports to the Sharp X68000 on November 26, 1994, the 3DO on December 16, 1994, the Sega Saturn on February 24, 1995, the Sony PlayStation on March 24, 1995, and both the FM Towns and NEC PC-9800 on September 1995. The X68000, 3DO, FM Towns, and PC-98 versions were published by in Japan by Electronic Arts Victor, the Saturn version was published by SUNSOFT, and the PS1 version was published by SCEI. Two of these ports received English releases in North America by Activision themselves.

It was also ported by ASK Kodansha to the PC-FX, released by NEC Interchannel on March 15, 1996.

The PS1 version supports the PlayStation Mouse peripheral and was also sold bundled with it.