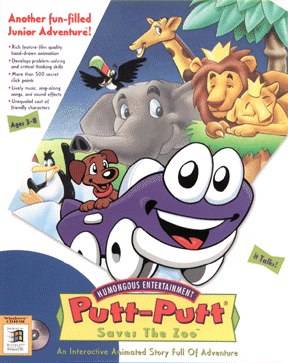 In this entry in the classic children's point-and-click adventure franchise, an anthropomorphic car and his dog go on an adventure in a local zoo.

Putt-Putt Saves the Zoo is the third title in Humongous Entertainment's series of point-and-click adventures starring the anthropomorphic car Putt-Putt. The game, aimed at children aged 3 through 8, takes place in Putt-Putt's home city of Cartown, where the local zoo is preparing for its grand opening. Putt-Putt and his dog Pep are asked to deliver Zoo Chow to the Cartown Zoo by the local grocer, but when they arrive at the zoo it is revealed that the baby animals have gone missing, and it is up to the player to find them. While looking for the baby animals players get to explore a colorful, highly interactive environment filled with mini-games and NPCs.

The game, like other early entries in the series, is powered by LucasArts' SCUMM engine; Ron Gilbert, creator of The Secret of Monkey Island and other point-and-click adventures from the company's early years, was one of the original founders of Humongous Entertainment.