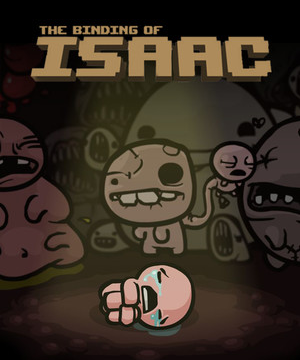 The Binding of Isaac

A twisted twin-stick shooter from one of the designers of Super Meat Boy. Players take control of Isaac, a young boy who delves deep into the dungeons of his basement as he is hunted by his deranged mother.

The Binding of Isaac is an indie horror action-adventure game developed and published digitally by Edmund McMillen and Florian Himsl for the PC (via Steam) on September 28, 2011. It was later made available for the Mac and was included in some Humble Bundles (with Linux support starting on December 19, 2012).

Built on Adobe Flash from one of the original creators of Super Meat Boy, The Binding of Isaac has players take control of Isaac, a naked (though not explicitly) crying child who must venture deeper down the dungeons beneath his bedroom floor to escape his religious sacrifice by his deranged mother. Along the way, he must fight demented monsters (using his tears as projectiles) and collect a variety of twisted powerups (mostly based on biblical, crude, and childlike themes).

The gameplay combines the claustrophobic twin-stick shooting of Robotron: 2084 with the room-based dungeon crawling aspects of The Legend of Zelda. The game is known for focusing on repeated playthrough attempts using roguelike elements (namely perma-death and procedurally-generated dungeons) and unlockable content (requiring numerous successful playthroughs to unlock them all). It is also known for its item system, as each playthrough contains a different random set of passive and active items for players to find (allowing them to create unique and monstrous combinations).

The game later received an expansion pack, titled The Binding of Isaac: Wrath of the Lamb, on May 28, 2012. Along with over 100 new items (including new pickup types, such as "eternal hearts" that add a risk/reward element), this expansion includes new room types, a new unlockable character, a challenge mode (in which players must complete a goal starting with a certain handicap), alternate floor themes (which include a new variety of enemies and bosses), and a new endgame. This expansion later received an update by Himsl (with no involvement from McMillen) on May 2, 2015, titled "Eternal Edition". Along with bugfixes, it adds a special "hard mode" that features challenging "Eternal" versions of the game's enemies and bosses.

On November 4, 2014, the game received a remake by Nicalis (under creative control from McMillen), titled The Binding of Isaac: Rebirth, which rebuilds the engine (allowing them to bypass limitations of the Flash engine, such as console ports and native controller support) and adds a variety of new content and both visual and audio updates. While the contents from the first expansion pack are included in the remake's base game, the contents of Eternal Edition is not.

The Binding of Isaac is, according to its creator Edmund McMillen, "a roguelike shooter based on the dungeon structure of the NES version of Zelda" and instead of using a traditional leveling system, the game uses an item system and there will be 4 sets of special items; usable items, special weapon upgrades, passive upgrades and stat boosters. In every level there will be a treasure room, shop, boss and other secret/special rooms which might contain unique items. Most of the items stack, meaning that over the course of the game the player's character will become a "monstrous powerhouse" in both stats and abilities as well as appearance.

There are also "micro puzzles" which use pickup items (coins, bombs, keys, hearts, cards and pills) to allow the player to acquire special items, gain access to shops/hidden areas, kill enemies and affect the gameplay in other ways.

Character progression in the game is treated as a mix between games such as Spelunky, Desktop Dungeons, and Super Crate Box. Item drops, enemies, rooms, characters, bosses, endings, and chapters are all unlocked as players complete certain objectives. The goal of this system is make the game's content feel richer as players spend more time with the game.

Users playing the "basic" game who find themselves struggling will be given helper items, whose purpose is to aid the player and make the game easier for them. For players who are doing well, the game will have more challenging bosses, extra chapters, and an overall increase in difficulty.

Five playable characters launched with the game: Isaac, Magdalene, Cain, Judas, and ???. Eve was added to the game in the Halloween update, and the Wrath of the Lamb DLC added Samson. All of the characters (with the exception of ??? which is based on a character previously created by Edmund) closely resemble standard DnD classes; Fighter, Thief, Cleric, Wizard, Druid, and Berserker.

Magdalene (aka, Maggy and Magdalena)

Samson (only available in the The Wrath of the Lamb DLC)

Unlocking each character will also unlock their special item as a pickup in the main game regardless of which character is being used. There are also unique familiars that are unlocked by completing the full game with each character.

There are several types of items in The Binding of Isaac.

Wrath of the Lamb DLC Cards

Wrath of the Lamb DLC Pills

Wrath of the Lamb DLC Trinket

Deals with the Devil

Each floor has a random boss that must be fought before moving on to the next level. The Basement, The Caves, The Depths and The Womb each have their own specific bosses. In the Wrath of the Lamb expansion pack, a new alternate floor was added for each existing floor. These are the Cellar, Catacombs, Necropolis, and the Utero, respectively. The final stage of The Depths/Necropolis will always be a fight against Mom. Mom's heart is unlocked after defeating Mom the first time, as well as the Four Horsemen. After beating Mom's heart nine times, it is replaced by It Lives. After beating It Lives once, and thus completing the game 10 times, the level Sheol is unlocked, as well at the new final boss, Satan. Once certain conditions are met, more unlockable bosses can be fought. Every boss has multiple colors that affect their properties and they can also appear in mini-boss rooms, usually with different properties that make them easier.

The Cellar (Alternate to The Basement)

The Catacombs (Alternate to The Caves)

The Necropolis (Alternate to The Depths)

The Utero (Alternate to The Womb)

Can sometimes be accessed before being permanently unlocked by having a devil room appear after defeating Mom's Heart.

Can only be accessed if the player has the Polaroid trinket.

The Seven Deadly sins are bosses that can randomly appear in any shop or secret room. Each of them has a "Super" version that were added in the Wrath of Lamb expansion pack. Pride has an "Ultra" version that resembles the developers - Edmund McMillen and Florian Himsl.

The original score for The Binding of Isaac was composed by Danny Baranowsky and is available through digital release at Steam.