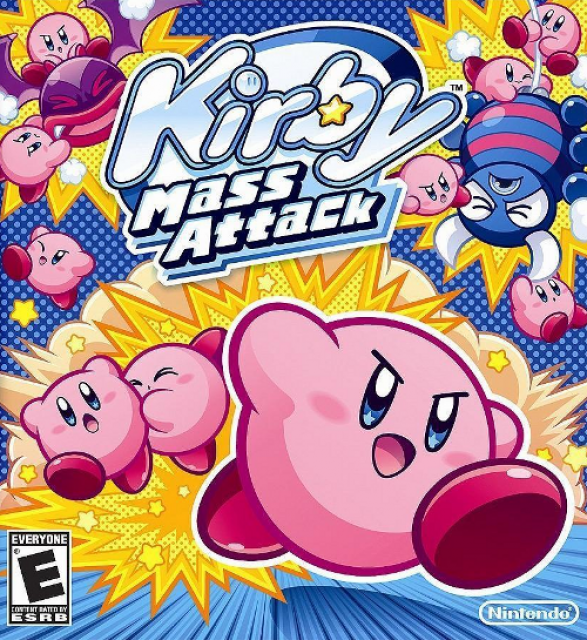 A new Kirby game for the Nintendo DS. It has the player control up to ten Kirbys with the stylus in order to get past obstacles and defeat enemies. The game has sold 1.06 million copies worldwide as of April 2012.
Nintendo DS Wii U

Kirby is split into 10 separate, less powerful versions of himself by an evil being with a magical staff named Necrodeus. Kirby must go on a journey to obtain Necrodeus' staff so he can use it to restore himself into one single Kirby again.

Kirby: Mass Attack is a sidescrolling 2D platformer that has players control up to ten Kirby clones at once. Players move the group of Kirbys with the stylus by tapping a location on the touch screen, and tapping the location repeatedly will cause the Kirbys to rush to the location. Swiping the stylus upward or diagonally will cause a Kirby to be thrown in that direction. Tapping an enemy will cause Kirby to attack that enemy. Keeping the stylus held down on the screen will cause the Kirbys to gather into a clump that you can then float around the screen for a limited time, allowing you to move Kirbys en masse over obstacles or up to platforms that are too high to jump up to.

While navigating the stages players will find fruit by smashing boxes, defeating enemies, and locating secret areas. Eating fruit fills up a meter on the top screen, and when the meter is full, you will gain another Kirby in your group. If you already have the maximum of 10 Kirbys when you fill up the fruit meter again, the game will gave you a score bonus instead of giving you another Kirby. Gaining more Kirbys is required to complete certain puzzles and obstacles. For example, you might need a certain number of Kirbys to press a large switch, or weigh down a heavy vine. Additionally, the levels require you to have different minimum numbers of Kirbys before you can enter the level, ranging from only requiring 1 Kirby for easy levels to requiring 10 Kirbys for most boss stages. The goal of each stage is to reach the gate at the end.

Kirby's health is handled differently than in past Kirby games. One can have up to ten Kirbys at once, but once hit, a Kirby will turn blue. Getting hit again turns the Kirby into a ghost, but one can recover the ghost Kirby by using another one to fling it back to earth before it floats away. A rating is given at the end of each level, dependent on how many Kirbys the player keeps alive in the level.

There will be medals hidden throughout the stages, and collecting these medals will open access to several mini-games. Each level contains one rainbow-colored medal, and these medals are more important, as you need a certain number of rainbow medals to unlock the boss in each world.