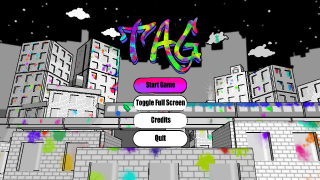 Tag: The Power of Paint

A game developed by students at Digipen and the basis of Portal 2's Gel System.

Tag: The Power of Paint is a puzzle game for PC; it was created by a team of students (referred to in-game under the name "Tag Team") from the DigiPen Institute of Technology in 2007/8. It received the Best Student Game award at the Independent Games Festival in 2009, was listed in the 2009 Pax 10, and earned 2nd place in IGN's Top 10 Indie Games of 2008. Tag was also noticed by Valve, who were developing Portal 2 at the time. As a result, Valve hired Tag's developers and implemented a similar system in Portal 2, similarly to how the original Portal was made.

Tag is available as a free download via DigiPen's website, or through Steam as released on April 18, 2022.

Players navigate an urban landscape, armed with a special paint gun. Each color of paint carries a different attribute; red accelerates the player's speed, green bounces the player away, and blue allows players to stick to surfaces. Additionally, any object in the environment which bears a color will impart the same effect as if it had been painted.

The Gel based repulsion and propulsion systems seen within Portal 2 are the descendant of this game's concepts. The blue "stick" gel from Tag was initially prototyped for Portal 2, but was cut during development, supposedly as a result of motion sickness concerns.