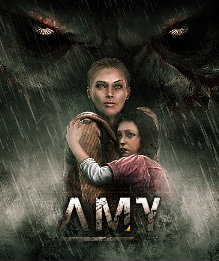 Amy is a survival horror game where the goal is to survive alongside the eponymous little girl Amy.
Xbox 360 Games Store PlayStation Network (PS3)

Amy centers around a virus that can turn its victims into zombie-like creatures, similar to those found in the Left 4 Dead series. The main playable character Lana also happens to be a carrier of the virus, however staying in close proximity to Amy will keep the virus at bay. A large portion of the game revolves around making do with a scarce supply of the cure, which can be found hidden in the levels or as a reward, and having to try and protect Amy from the infected.

This little girl whom players have to protect through the entire game will realistically behave like a child and will explore the rooms with Lana, and will point out items of interest similarly to Yorda from the game ICO. The intent was to have Amy react to her environment and display emotions naturally in order to facilitate a feeling of responsibility and care for Amy.

Lana's infection level is constantly rising, and without the constant application of medicine she will die, adding an ever present sense of urgency to the game. The player character's appearance will change dynamically to display her degree of infection; this is a separate mechanic from health. Lana's proximity to Amy is essential, as Amy emits an aura which suppresses the infection.