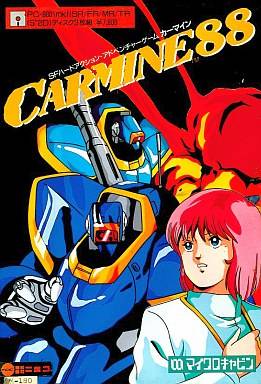 A first-person adventure game with RPG elements, released by Microcabin in 1986. The game featured environments rendered in 3D polygon graphics, for possibly the first time in a home video game, along with early survival horror elements. However, the game is better remembered for its cyberpunk narrative, which was adapted into a sci-fi novel shortly afterwards.

Carmine is an adventure game with visual novel and RPG elements, which include dungeon crawling, random encounters, and turn-based combat. The game is viewed from a first-person perspective, with the environments rendered using flat-shaded, 3D polygon graphics, making this the earliest known example of a home video game with polygonal 3D environments. The story on the other hand is mostly presented in 2D visual novel fashion, with pictures and dialogue tree boxes, as an overlay on top of the 3D graphics.

The game also has several early survival horror elements, with an emphasis on survival, limited health and ammo, violent gory scenes, and a sense of danger. The emphasis on survival is further reinforced with the combat being almost entirely randomized, relying on a type of dice roll system to determine whether or not an enemy is hit. While this may have further emphasized the survival element and sense of danger, this randomization aspect has faced criticism for making the gameplay somewhat frustrating at times.

Despite the somewhat mixed reaction to the experimental proto-survival-horror 3D gameplay, the game's cyberpunk narrative on the other hand has been well received, particularly for its surprising plot twists. The plot was also non-linear, as the the story scenes could be viewed out of order, and it isn't necessary to view all the story scenes to complete the game. The game's story was adapted into a sci-fi novel shortly after release.

It is September 2008. A crisis has occurred at the underground bionics research facility of the Forhumbus Heavy Industry (FHI) headquarters. A group of combat androids virtually indistinguishable from adult humans but with superior abilities, known as Bio Dolls, have infiltrated the facility and staged a Bloody Mutiny against the bionic engineers who created them.

The latest report indicates that the Bio Dolls have killed most of the research staff and are now in complete control of the facility and its security systems. To make matters worse, the hostiles have also gained access to the various AFW (Armored Fighting Walker) prototype units that were currently being developed at the site. Thus, they have become a threat beyond what the local authorities can handle.

In response to this critical threat, the army has dispatched an elite AFW Special Forces Team to eliminate the Bio Dolls and secure the facility. LT. Brian W. Kernighan is part of this elite AFW special forces unit sent by the army to crush the replicant uprising. His orders are clear: Eliminate them... with extreme prejudice...