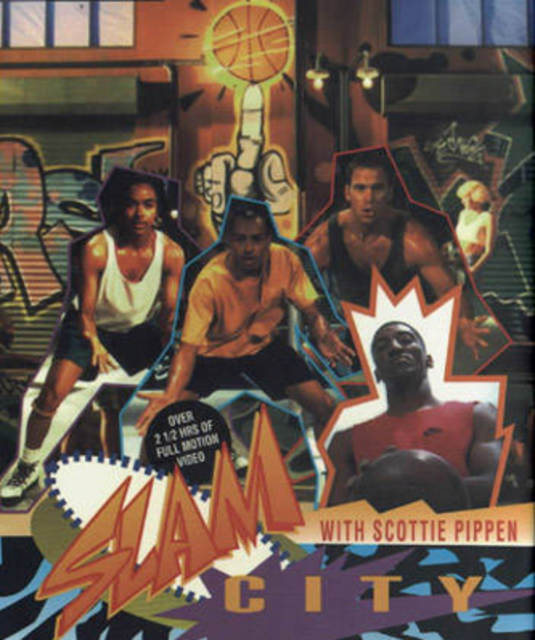 Slam City with Scottie Pippen is a full motion video street basketball game developed and published by Digital Pictures for the Sega CD on November 1994. It was later released as a "Sega CD 32X" game (along with a MS-DOS release) in 1995.

A FMV-based sports game similar to the studio's earlier Prize Fighter, Slam City is a one-on-one half-court "streetball" game played primarily from a behind-the-back perspective, with two sets of FMV video stacked on top of each-other (a first-person camera and a sprite cutout of the player character). Requiring much trial-and-error, players must use careful timing and correct technique to either score baskets or prevent the opponent from scoring.

Players control up-and-coming streetballer "Ace" as he challenges numerous streetballers ("Fingers", "Juice", "Mad Dog", and "Smash") to gain enough reputation points to challenge professional NBA basketball player Scottie Pippen (as portrayed by himself). Like Prize Fighter, the game features numerous cutscenes that can be shown during each match (most of which are comedic).

In addition to acting in the FMV sequences, Pippen also performed the game's main theme ("Respect") in conjunction with John "Jellybean" Benitez. Also notable is that the actor for "Mad Dog" is former professional American Football player Keith Neubert.

The game is played from a behind-the-back perspective with a video running in the foreground of a basketball game. Although the game attempts to make itself feel like a third person game, but is instead a sprite cutout placed in front of a video of a guy filming a basketball game in first-person.

The opponent will attempt to steal the ball or block shots. These attempts must be dodged and wait for the opportunity to score. Because of the limitation of the FMV format, the player can only score at predetermined points indicated by certain movements from the opponent. After every attempt to score, the game cuts away to show activities of the various onlookers.