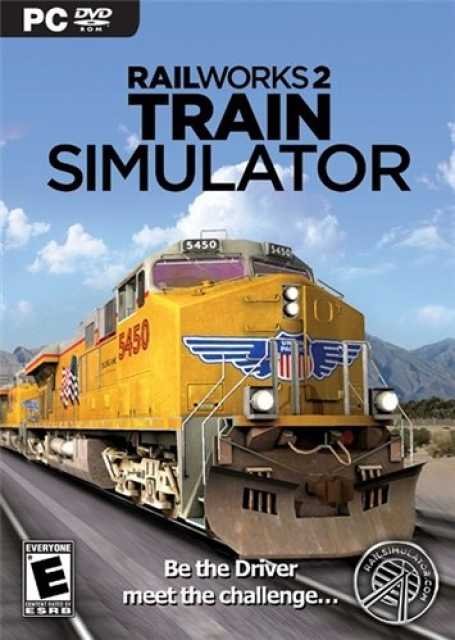 Railworks 2:train simulator is back with an all new easy to use interface, career mode, and steam achievements.

Train Simulator. Be the Driver. Meet the Challenge

Railworks 2 is really more simulation than game as it lets you drive an accurately re-created selection of trains though real life scenarios. From the present day diesel and electric locomotives to the giants of the steam age, Railworks 2 has tons of engines for players to learn to operate. All of the locomotives have been carefully researched and modeled to stunning accuracy. Players can choose between eight different routes, 5 real world, 3 Fictional. Each route contains scenarios ranging from easy, medium, to hard in difficulty. All of the routes have been carefully recreated with accurate signaling and signage. Railworks starts players off with a simple control set up and features a new interface upgrade to help new players learn to drive. Once players master simple controls they can move on to expert controls.  Once expert controls are activated players can choose to play the new career mode with 50 scenarios in which scores are tracked and can be compared  with others across the world.

In addition to driving trains players can use the World Editor to create custom routes and scenarios.

The Railworks train simulation series should be known to those who visit the steam store regularly as the game features almost 1,900.00 USD in DLC at the time of this writing. Although it seems overwhelming, the DLC is really not intended for every player to buy every piece. Some train enthusiast are steam fans while others are more diesel or electric fans. The base game contains all kinds of locomotives and the DLC is there to expand and support those who want a deeper experience with certain kinds of locomotives over others.

The route is set in 1955 at the peak of the lines activity. A mix of passenger freight stock is provided in authentic colours to represent the truly mixed operations that took place in its day.

This inter-city route has been built to represent its modern day form. The route is, as accurately as possible modeled on how the line operates and appears in late 2005. The rolling stock sports the very latest that First Great Western issued after their successful bid ti operate the line foe a further period of 10 years.

The route has been constructed around a popular  period set in the mid 1970s. Durings this era, the line reached an all time high for freight traffic volume, maily due to nearby coal reserves and the norths abundance of industrail and manufacturing based commerce. Also fondly remembered from this time is the class 55 Deltic Napier Locomotive, regarded by many as the greatest diesel to grace British Railways.

Chosen for its mixture of Freight and Passenger operation, this route has been constructed around the period of the late 90s.

This vital artery in the transcontinental movement of freight in America is represented in a modern day setting. The line has been modeled to 2007 reference material and even features the brand new signaling system recently installed throughout- consisting of 3 aspect hooded signal heads.

This fictional railroad is based on an area between Colorado Springs and Denver for the interesting geography and rock formations and is set in the modern era circa 2009. Lakespur houses a preserved F7 engine which is frequently seen in operation down the railroad.

this fictional industrial route has been built to represent post transition period of the railways when British Rail set about modernising its traction and introducing a new fleet wide corporate brand.

The fictional route is modem day circa 2009, but with the steam heritage centre at Echten and the preserved V 200 at Berndorf Engin Shed the line frequently sees operational rolling stock from the past fifty years for special charters and as a tourist draw.