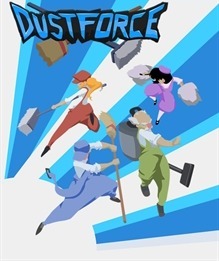 Dustforce is a platformer by indie developer Hitbox Team in which ninja janitors dust and sweep their way through the environment.

Dustforce is an action-platformer developed by Australian developer Hitbox Team depicting the adventures of a team of ninja janitors known as Dustforce. Rather than collect coins or destroy enemies, characters dust and sweep the environments, which are full of dirt, leaves, and other debris. Characters are able to double jump, wall run, and perform combos in their quest for clean.

A demo was released on August 1, 2010 for the PC. It includes a tutorial, two maps, and a level editor, allowing players to create their own maps.

On 24 October, 2014 Dustforce DX was released as a free update for the game. This update included 16 new easy levels, remade tutorial, a redesigned hub to smooth the progression and 109 community-made levels.

The main gameplay in Dustforce consists of navigating Super Meat Boy-esque levels while avoiding hazards and cleaning debris off of the environment either by running over a dirty area or using attacks to knock the offending detritus off of wild animals; being covered in garbage has made the animals scared and hostile, and will attack Dustforce members until they are cleaned off.

Cleaning the level fills up a meter which, when full, lets players use a full-screen attack that defeats all of the currently visible enemies. This is generally useful for large clusters of entities that require cleaning, but it resets the mid-air jumps so it be used to cross very wide gaps.

Upon completion of a stage, the player is given a rank in both Completion and Finesse. Completion measures the percentage of refuse cleaned in a level. Finesse reflects how high of a combo players are able to maintain. If both of these conditions are S-Ranked, the player is awarded with a key to unlock additional levels. Unfortunately, this means that levels must be perfected before the player can advance beyond a certain point.

Cleaning all of the debris in the level is usually as simple as working out the most fluid path to hit all of the dirty surfaces. Getting an S-Rank in Finesse means that the player must build up their combo by cleaning things with a less than five-second gap between, otherwise the combo resets to zero. A perfect run involves clearing all of a level's debris and defeating all the enemies while maintaining a single combo.

The game features a local-only multiplayer component. Up to 8 players containing teams of 4 can play (4v4). One team takes on the role of cleaning a stage as members of the Dustforce while the other team leaves dust everywhere they go and are tasked with making the stage as dirty as possible.

The level editor was released on May 1, 2012 as part of a large update which also brought the game to the Mac. Created levels can be uploaded and shared on Atlas, the official Dustforce level sharing community.

There is an in game list of fastest runs for each stage sorted by rank and clear time. A replay of each entry in the list is able to be viewed in game, but only after players have completed the level once.

Dustforce has a wide variety of enemies. Enemy type and behavior varies depending on a level's theme, though the 'orb' enemy is common to all.

Dustforce has only one Steam Achievement named "Double S+" with no accompanying description. This is obtained by achieving an S rank in Completion and Finesse on all levels.

It is assumed that this single achievement is only a placeholder and that more achievements are forthcoming.

There are also three additional bonus tracks if the soundtrack is purchased.