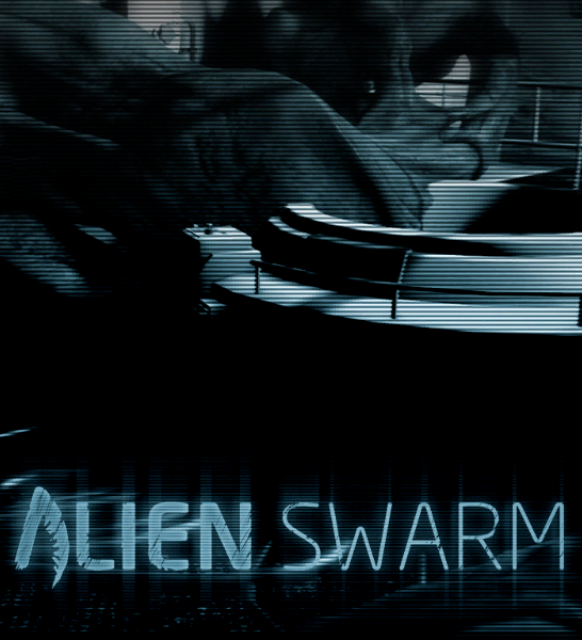 A freeware top-down co-operative shooter where a squad of marines must investigate and prevent the spread of a rampant alien infestation. It was originally a total conversion for Unreal Tournament 2004 before its team, hired by Valve for other projects, completed it as a side-project.

Alien Swarm is a freeware sci-fi co-operative top-down shooter developed and released digitally by Valve for the PC (via Steam) on July 19, 2010.

As a squad of four marines of the Interstellar Armed Forces, players must investigate a derelict colony on the planet Vereon XII that was overwhelmed by an alien infestation. As players gain experience points between missions, they unlock new weapons and items for use in their loadouts.

Similar to Killing Floor, the game was originally developed in May 2004 as a total conversion modification for Unreal Tournament 2004. A version for the Source engine was in development in 2005 before being discontinued, as the team behind the mod was later hired by Valve for work on several Source engine games. Developed as a side-project, it was released for free alongside both the source code and special SDK tools (including "TileGen", a special level creation system where builders can arrange prefabricated rooms similar to the MapMaker system from the Timesplitters series).

Players can choose from one of eight characters, each split into four different classes:

All-rounders with a specialty in explosives, Officers can carry a powerful pump-action shotgun (the Vindicator) with an underbarreled grenade launcher (that fires incendiary grenades). They also have an aura of leadership surrounding them (which boosts the damage dealt and the damage resistance of all nearby squadmates).

Focused on providing general firepower, Special Weapons can carry up to two powerful fully-automatic weapons (the Autorifle and the Minigun) and are the only characters whose weapons can overpenetrate targets and objects.

While they do not possess the most powerful firepower, Medics have the unique ability to heal their squadmates (where otherwise they would need to heal themselves using the Healing Kit item) using both area-of-effect deployables and a dedicated Medical Gun (which fires a healing beam). While they are not required for missions, they are invaluable on missions with the Parasite enemy (as they significantly help reduce the effects and duration of the "infestation" effect).

While they do not possess the most powerful firepower, Techs have enhanced radars (which have three times the scanning range of normal radars) and can improve the speed of some tech-related actions (namely welding and Sentry Gun management) of nearby squadmates. They are also the only class that can hack mission-critical switches and computer consoles (which uses a special minigame), and as such are required in some missions (which cause an instant failure if all Techs are killed prior to the completion of all hacking challenges).

Alien Swarm features a loadout configuration system consisting of two weapon slots and one item slot per player. Most of these require the player to level up by playing the game.

Alien Swarm comes with one seven-map campaign, titled "Jacob's Rest", in which a marine squad of the Interstellar Armed Forces must investigate a colony on Vereon XII that is overwhelmed by aliens.

The Alien Swarm SDK (also known as the Alien Swarm Authoring Tools) was released along with the original launch of the Steam version of Alien Swarm. It is a special version of the Source SDK, including a suite of tools used for developing for Alien Swarm. The SDK also includes the full source code for the game, which includes updates to the Source Engine and full Steamworks integration.

While the SDK allows the player to build maps in Valve's Hammer utility, it comes with a special experimental tile-based level generator called TileGen; which allows level designers to create level arrangements using predefined rooms (in a similar fashion to the MapMaker mode in the TimeSplitters franchise). TileGen can also use predefined "mission generation rules" to randomly generate a level. More information about TileGen can be found here.