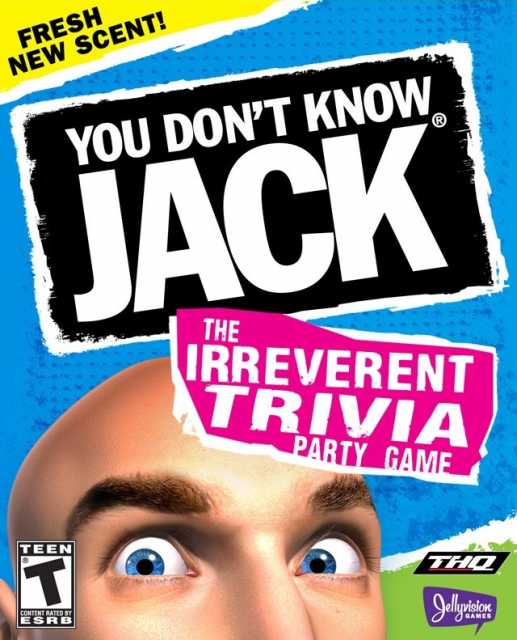 Published by THQ and released on February 8, 2011, this is the first new retail edition of You Don't Know Jack since 2003. The 360 and PS3 versions of the game support online multiplayer, unlike their Nintendo and PC counterparts.

The game includes the returning "Dis or Dat" and "Jack Attack" modes, in addition to some new features including "Wrong Answer of the Game." The game has all-new questions for the modern era, new commercial parodies, and the returning ability to "screw" your opposition, forcing them to answer a question within 5 seconds. Tom Gottlieb returns as irreverent host, Cookie Masterson.

You Don't Know Jack has four packs of DLC available for the Xbox 360 and Playstation 3 versions. Each pack has 10 episodes with 10 questions each, and is priced at 400 Microsoft Points ($5).

The basic gameplay of You Don't Know Jack has changed slightly in this version from its previous incarnations. Instead of a player "buzzing in" individually and choosing an answer to a question, every player can choose an answer for each question and earns cash based on how quickly he/she answers. This version of the game also features persistent profiles, and will track your progress as you play, online and off, rating your performance and posting your overall ranks on local and online leaderboards.

The "New Fresh Scent" comes in the form of several new question types, including:

"Nocturnal Admissions" is a question variant that has Cookie tell you about a dream he had after falling asleep from eating too much junk food and watching a movie. His dreams will always involve his cats Poopsie and Mayonaise, as well as his mother. From his description, the players will have to identify what movie he watched before falling asleep.

"Who's the Dummy?" is a question read to you from Cookie's ventriloquist dummy, Billy O'Brien. It's made trickier due to the fact that Cookie isn't a great ventriloquist and can't get his P's, B's, M's, or R's right.

"Wrong Answer of the Game" is a twist on the trivia genre that actually encourages you to choose the WRONG answer. Each episode will have its own sponsor, and in each episode there will be a specific incorrect answer with a keyword that is related to the sponsor. Choosing this wrong answer will net you double points and a collectible prize. In a tight game, this is a strategic way to pull ahead of your competition. Prizes are available to you for finding the "wrong answer of the game" in each episode and are available to view in your profile.

"Dis or Dat," where Cookie will read off a list of seven items and players are asked to sort them into two distinct categories. The players are given thirty seconds and completing the list before time runs out will yield bonus cash. Occasionally, the players will be given a Dis or Dat with the option for both. These lists are the most dreaded variation of this question type. In offline Dis or Dat games, the other players not participating can attempt to "steal" any wrong answers and claim the cash for themselves. For online Dis or Dat games, each player will participate in their own "instance" of the game.

"It's The Put The Choices Into Order Then Buzz In And See If You Are Right Question" is a multiple choice question where Cookie will list three things and then ask the players to put them in a specific order. Because these questions are designed to be tricky, Cookie gives players who get this question right an additional $1,000.

"Funky Trash" is a classic YDKJ question type where Cookie searches the personal trash of a famous person, and the player is asked to identify the person based on what he finds.

The "Jack Attack" is always the last round of each episode. A list of seven items are displayed on the screen while a second list of words fly by one by one. The players are tasked with buzzing in when the correct pair of items are on the screen based on a "clue" given at the start of the round. Correct responses earn $4000 and incorrect responses lose $4000. A quick response time is key in this round as only the first person to buzz in correctly gets the prize. The high-stakes nature of this lightning round makes the "Jack Attack" the most important round in each episode, and a comfortable lead can disappear in an instant if players are not careful.

Many old characters return from older incarnations of the game as well as several new additions.

The longtime host and former sign-in assistant returns to host this iteration of YDKJ. During the course of the game, the players are given more insight into Cookie's twisted background, including the fact that he has two cats, Poopsie and Mayonnaise, and lives with his mother.

Helen returns as the "producer" of You Don't Know Jack. Heard primarily in the background immediately preceding and following each episode, Helen can occasionally be heard in the middle of an episode, usually showing her disdain for Cookie's shenanigans.

The new sign-in guy, he makes sure new players are quickly brought up to speed on how to play the game. He also has an affinity for "sophomoricated wordments".

Chad is called in from time to time to read a quote that Cookie needs for a question. Unfortunately, he never remembers to bring in the quote due to miscommunication and is forced to ad-lib the quote for the players in his native "bro-speak."

YDKJ favorite Old Man appears from time to time to assist Cookie with asking a question, which often will involve Cookie convincing Old Man to do something stupid in the name of trivia.

The amount of memory it takes to install this game is 2.1 GB.