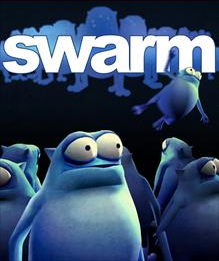 Swarm, the new game by Hothead Games, introduces the Swarmites, blissfully ignorant little blue creatures that have zero awareness of their surroundings, thus making way for some sadistic yet very funny moments. Swarm was released on March 22, 2011 for PlayStation Network and the following day for the Xbox Live Marketplace.

Swarm is all about getting to the end of the level with the highest possible score. The player must use and abuse the Swarmites in order to do so, sometimes sacrificing some for the greater good (read score), or sometimes sparing them from some terrible death in order to unlock more and more goodies to collect and to increase their final score.

You have a multiplier that you must keep going in order to achieve a good score. As written above, sacrificing swarmites is a way to keep your multiplier going. But that's not the only way to score points. There are multiple explosive boxes that you can blow up to get little swarmite food that keeps your score going. There are different types of objects to collect including collectible DNA.

To keep your multiplier going, you must:

Your swarmites can be ordered and take different positions. You can spread them out or huddle them together. These two basic commands lead to other kinds of possibilities. By advancing  with a huddled swarm you can de-huddle them which results in a sprint. By huddling them together and not moving, you can pile them onto each other to reach higher areas. You can also air dash.

In order to finish a level, the player only has to reach the end with a single Swarmite, but will be rewarded if more are able to conclude the level.