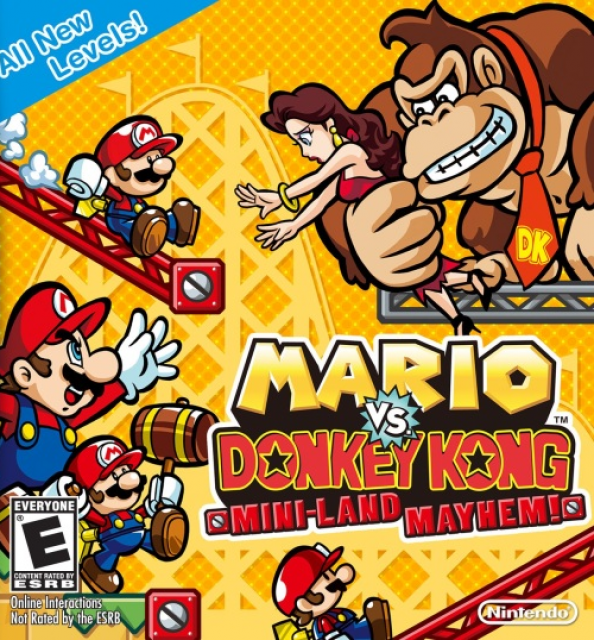 Control a cadre of Mario miniatures to battle Mario's nemesis, Donkey Kong. It's more focused on creating a path this time.
Nintendo DS

It's the grand opening of Mario's new amusement park, and he is giving away Pauline toys to the first 100 guests. Arriving as the 101st guest, Donkey Kong misses out on a toy and instead kidnaps the real Pauline. Mario then chases after Donkey Kong with his army of Mini toys.

Mario vs. Donkey Kong: Mini-Land Mayhem plays like the previous games in the series. The difference is that you don't have direct control over the Mini-Marios this time around, except starting them. The game is more focused on making a path to the goal for them by making bridges, placing springs etc. Guide them all to the exit door to clear the area. Unlike the previous game, you have to make a combo chain thorugh the door with all Mini-Marios, too slow and the door is blocked resulting in a Game Over.

This game, unlike the previous game also, will not tolerate any destroyed mini-Marios, if one is hit, it's game over.

Mario vs. Donkey Kong: Mini-Land Mayhem is broken up into 8 stages (Attractions), plus Special stages and Expert stages as well as a plus mode. Each has a theme that unifies the areas on each stage. Stages consist of 8 areas, a boss battle and a mini game. The 4th and 8th areas are special because they feature an extra mechanic. The 4th area of each stage is a mulitdoor one where you not only have to lead Mini-Mario to his door, but a mini-Toad, mini-Peach, mini-DK and mini-Pauline as well, each of them has their own door they need to enter to complete the stage, the 8th areas requires that the sole mini-Mario with a key attached to him is the first to enter the goal door before the other Marios can walk through it.

This game also features "MINI GUIDE" similar to the Super Guide in most recent Nintendo games, it appear on the Game Over screen after losing a area enough times.

After the main game you can try Plus Mode which will make you tackle the same stages, but requires you to guide your marching toys into the goal door in a specfic order, not doing so will result in game over.

Construction zone makes a return and is similar to the one in the previous game. You can submit you creations online and download others.

Once you complete a attraction in the main game, you can use that attractions theme and tools in the construction zone.

Much of the game is controlled with the stylus.

Mini-Mario's can collect these things in within a area:

Use these things to help Mini-Mario to the door.

Watch out for these:

Mini-Shy Guy: Contact with these will destroy Mini-Mario. Get rid of them with hammers or sliding into them.

Living flames: A living flame that moves around and can climb ladders. Hammer him to get rid of him or make him fall into spikes.

Brown DK robot: Any Mini-Mario that runs into him will be juggled. Any means of escape is either if you can reach ground above him or another hammer-wielding Mini-Mario stuns him.

Grey DK robot: Walks around and kidnap any Mini-Mario he comes across, if he get them all it's game over. Rescue his victims by stunning him with a hammer.

Electric ball: These annoying enemies will zap Mini-Mario on contact, you will find them in stages with magnet surfaces. They move along the magnet surface and go the opposite direction when hitting a dead end.

Mini-Pokey: A Pokey that moves around and hurt Mini-Mario, that's it. He being in the area usually means there is yellow enemy blocks in the area somewhere only he can make solid.

Mini-Snifit: Shoots a set of five bullets in the direction he is facing, pay attention to the sounds he makes to know when he his about to fire a new set.

Piranha Plants: A immobile enemy, some of them shoot fireballs that bounce 180 of solid objects.

Each area has a default hi-score for you to beat. In order to get these you pretty much have to collect all the collectables and be fast enough to stand a chance.

If you do so, you earn a trophy for that levels.

You use trophys to attempt the Expert Areas.

Special Stages: As you collect Mario coins you unlock areas in the final stage.

Expert stages: Earn Trophys to try these ones.

Mini-Boss Stages: In all of the boss stages Donkey Kong sits up on a platform holding Pauline. You have to use the tools from the stage to navigate to different objects flanking DK. There are 3 objects, and the stage ends when Donkey Kong is hit by all three.

Mini Game: The mini-games involve guiding Minis that fall from the sky down in to boxes below. There are 5 boxes which chance value periodically. The values can be x4, x2, x1 and x-1. In another version of it, the mini-game is about placing the right toy into correct box instead. In plus mode the mini-games have insant game over spike traps. Each stage's mini-game uses the new skills and objects in the level. Doing good in these earns you 3 M-medals.