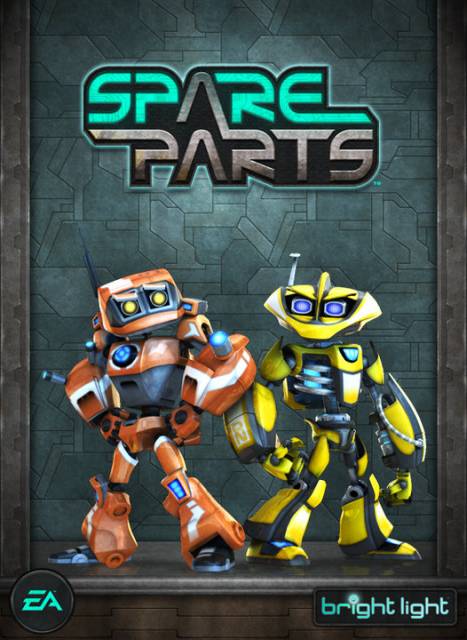 Stranded on a strange planet, two robots must work together to salvage parts for their spaceship in this downloadable action-adventure title from EA Bright Light.
Xbox 360 Games Store PlayStation Network (PS3)

Spare Parts is a co-op action platformer developed by EA Bright Light and published by Electronic Arts Games. Players take on the roles of either Mar-T or Chip, two robots who have been stranded on an alien planet by the dreaded Krofax race. Early in their adventure, Mar-T and Chip come across an abandoned spaceship which houses Con-Rad, the ship's computer (voiced by Simon Pegg). Con-Rad essentially acts as the player's guide, leading them to ship parts that will rebuild the ship to a functional state, allowing them to leave the harsh planet and their dangerous inhabitants.

The gameplay in Spare Parts is centered around players cooperatively exploring the alien world while using upgradeable abilities, such as power arms and rocket boots, to overcome obstacles and find their way to safety. As with many co-op games, Spare Parts can be played either locally on the same console or online. There are "co-op only" abilities and interactions that are only available to two players, giving an strong incentive to experience the game with another player. However, the game can still be played single-player, but unlike most co-op oriented games, it will not feature an AI companion. If players do choose to play cooperatively, they can receive bonuses for simultaneously combining and using certain weapons.

In addition to Mar-T and Chip, other robots have crash-landed or been abandoned on the planet. The players can choose to rescue and repair these robots and unlock them as playable characters.

On April 13th 2012, only 15 months after the game was released, the online servers for the game were shut down. No online co-op play was possible after this, although owners of the game can still play co-op locally.