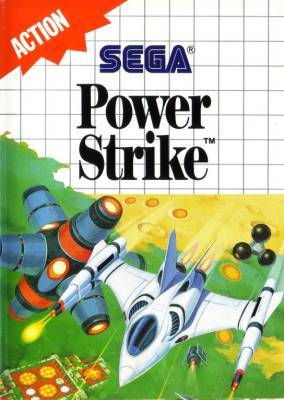 A vertically-scrolling shoot-em-up from Compile and the first of their Aleste series. The Sega Master System version was localized as Power Strike for Western territories.

The first game in Compile's Aleste series, Aleste has the player control a spaceship flying through a series of vertical levels, shooting down alien aircraft and collecting power-ups which increase both the ship's offensive and defensive capabilities.

The game was released on Japanese MSX systems as well as the Sega Master System. It was later released in the US and Europe as Power Strike, which would then go on to inspire a sequel of its own without Compile's involvement.

Each of Aleste's power-ups are numbered, and can be found throughout the stage. Each needs to be shot to dislodge them and then collected before they can float off screen. There are eight main weapon types and the "P" icons, which increase the current weapon's power. Important to note is that all special weapons (besides "1") are finite in nature, and will vanish after 80 seconds. Collecting another power-up of the same number will add another 80 seconds to the timer.

As well as the special weapons below, there is the default laser. Though relatively weak, the laser can fire in multiple directions like a spread shot gun when powered up.