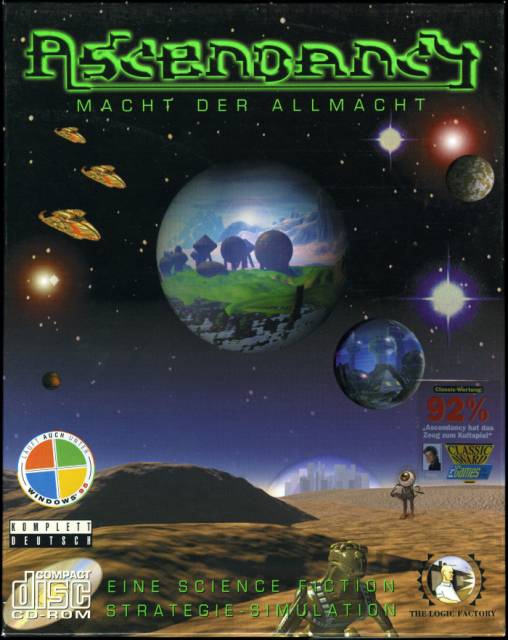 Ascendancy is a turn-based strategy game by The Logic Factory and released in 1995. Players choose one of the alien races, each with unique abilities, and build factories, spaceships, develop new technologies, explore

The object of the game is obscured, which was one of the main notable traits of it. The instruction manual was pointedly vague about the exact winning conditions; instead, players just build and expand without knowing exactly what they are trying to do. When a player accomplishes a goal, such as establishing galactic peace or expanding to 2/3 of the star cluster, they get a notice that they are some percentage "ascended".

Players can customize their game experience before starting a new game. They can choose to play in a star clusters with density ranging from "vaculous" (only a few stars) to "very dense" (with many stars). Each star is connected to a few others by "star lanes", which are like wormholes but take significant time to travel through. Players cannot customize the arrangement of stars, nor choose their starting location.

Players can also choose the number of alien species in the star cluster, ranging from 3 to 7. They can also set the general diplomatic tone to peaceful, neutral, or hostile.

Players also choose their race from the 21 available in the game on this screen. Each race has a different special ability, that significantly impacts gameplay. These are the same They are listed here:

Minions: Spend only one invader to invade a planet, regardless of defenses.

Each of the races also has a particular personality; the Govorom and Hanshaks are peaceful and friendly, while the Shevar and Frutmaka are consistently aggressive.

The turns are called "days". Each planet can build a single item, either one of the surface tiles or in one of the twenty orbital tiles. Larger worlds have more space on the surface, but every world has the same orbital space. Worlds also vary in quality, from the abundant "Cornucopia" planets with all manner of special squares down to desolate vacuums with minimal living space and all uninhabitable squares. Worlds can also be specialized; "Mineral" worlds contain an abundance of red tiles, which improves production, but few green (population growing) or blue (research) tiles. Because most of the combat-relevant structures are in orbital slots, but most of the production structures are on surface tiles, all sizes and types worlds have some value.

Combat takes place in a 3D environment, even though all the art is 2D. When players move ships, they choose to move them either toward an object (like another planet or ship), or they choose a point on the x-y plane and then set a height for z to move toward. Each species takes turns moving and activating weapons and items during combat, until no actions remain. If a player tries to advance the day while combat is still taking place, the game notifies them of "hostile alien ships" in the sector. This prevents a player from overlooking a major battle.

Ships are each custom built. Every ship has a number of tiles, depending on it's size, which determines the number of components it can carry. Including multiple engines will allow the ship to travel further in a turn, while multiple star lane drives allows travel through star lanes more quickly. Individual

Nearly everything in the game is micromanaged by the player, from which worlds to colonize to where every factory is put and even where each ship component goes. Worlds can be put on "auto-manage", but the AI does a poor job managing them, often not even taking advantage of special squares when building necessary buildings.

The enemy AI was poorly written in the release, but the official Antagonizer patch improves both the quality and aggression of the AI in Ascendancy.