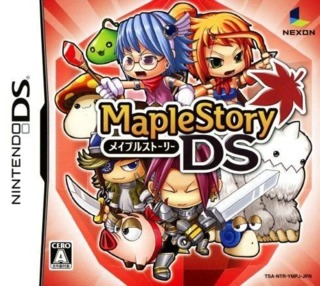 A single player version of the free-to-play MMORPG MapleStory on the Nintendo DS.
Nintendo DS

MapleStory DS is an action RPG developed and published by Nexon Corporation for the Nintendo DS platform.

The game was originally announced at E3 2006, said to be released in September 2007. After a long wait, Nexon announced that the Korean release was to be set sometime in 2009 and, later on, January of 2010.

Later, in February 2010, the game was announced to be released on April 15th, 2010 in Korea. Apparently, there will no longer be any delays as Nexon Corporation and Nintendo of Korea have revealed a large amount of new media (commercials, screens, interviews...) concerning the game recently. This date is the exact same date the Nintendo DSi will be launched in Korea.

No plans to release MapleStory DS have been announced in any other region after the Japanese one.

MapleStory DS will not be an MMORPG in any way. In an interview from December 2009, it has been said by the manager of international business development at Nexon (Stephen Lee) that the game's focus is on single player, with limited multiplayer functionality. MapleStory DS will not support WiFi.

Like its PC counterpart, MapleStory DS is a side-scrolling, 2D RPG. Players start by selecting one of four characters: an archer, a magician, a warrior or a thief. Each of these characters have their own storylines.

Players kill various monsters with basic attacks or special skills. Killing these monsters rewards the player with experience points, that increases the level of the player, loot and/or money. When players increase in level, they in turn distribute their gained attribute points and skill points to make their character more powerful. The skill points are used in a skill tree.

Players also choose to equip equipments, that have various properties, via an item menu. There are 6 varieties of equips: a hat (helmet, headband...), an overall (kimono, suit...), footwear, earrings (usually with magical properties), a one-handed or two-handed weapon (hammer, sword, staff...) and a ring. Many of these equipments have level and class restrictions.

Supposedly, a player can choose to join the game of another with his or her character. Not much has been said about it except for the promotional videos demonstrating some of it.