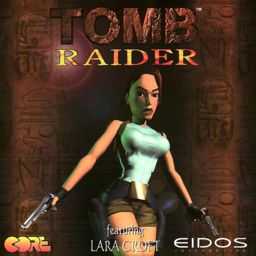 Tomb Raider stars Lara Croft in her first title as she races through the jungles of Peru to the sands of Egypt in pursuit of the Scion, an ancient artifact reputedly holding the key to the ancient mystery of Atlantis itself. It would later be remade as Tomb Raider Anniversary.

Tomb Raider, originally released in 1996, is an action-adventure game starring Lara Croft: a beautiful and fiercely independent archaeologist. True to the game's name, the game involved Lara exploring tombs and ruins in search of ancient artifacts. The game was developed by Core Design and published by Eidos Interactive. It was released first for the Sega Saturn but became available soon after for the PlayStation, PC, and Mac. The game proved extremely successful and spawned the now legendary Tomb Raider franchise. The game was re-released with two extra chapters in 1998 as Tomb Raider Gold, and was later remade by Crystal Dynamics with updated graphics and gameplay in Lara Croft Tomb Raider: Anniversary.

The game opens with a short cutscene in Los Alamos, New Mexico. A nuclear test in the desert causes an earthquake which reveals an ancient artifact. The game then jumps forward to present day, where Lara is given a cryptic mission by Ms. Jacqueline Natla through a laptop delivered to her by Natla's assistant Larson. Lara's interest is piqued when she is informed that there is an ancient artifact -- the Scion -- in the unexplored tomb of Qualopec in Peru. Lara takes the job, and the game begins.

The gameplay takes place in ruins across four locations: Peru, Greece, Egypt, and Atlantis. The player must navigate Lara through these ruins in search of three Scion artifacts. The game is presented from a third-person perspective with the camera following directly behind Lara. The player has no direct camera control. The game uses tank controls, which helps with methodically lining up very precise jumps, but hinders fast action situations like combat.

Lara has an array of moves and abilities which she can use to navigate tricky platforming obstacles, traverse expansive 3D spaces, battle dangerous foes, and solve environmental puzzles. Some of these basic skills include running, jumping, flipping, turning, rolling, scaling ledges, swimming, firing weapons, and shimmying sideways until there is room.

An optional tutorial called Lara's House can be played from the main menu. It takes place in Lara's family manor, and presents a short series of simple platforming scenarios for the player to practice as Lara narrates directions.

Upon completing a level, an end-level screen is displayed showing the player's stats for that level, such as number of kills, number of secrets found, and time taken. (Beware that the last level of the game has a bug that prevents one of its secrets from being properly counted.) Most levels' entry points are modeled to match the exit of the preceding level to give the sense of the levels connecting directly together, which helps the gameworld feel larger and more immersive.

During gameplay, Lara has two stances which she can flip between: holding weapons and not holding weapons. In her weapon stance, pressing the action button fires her weapons, her only method of fighting and defeating enemies. In her non-weapon stance, pressing the action button makes Lara grab or operate objects in the environment, which is crucial for climbing and puzzle solving. Her default weapon is the dual pistols, which is the weakest weapon in the game, but the only one with infinite ammo. She can also use dual magnums, dual Uzis, and a shotgun. Ammo for these other three weapons can be found scattered about levels. Normal enemies do not drop anything, but a few bosses drop unique items like keys or weapons.

There are many hazards that can hurt Lara, including traps, attacks from enemies, falling from great heights, and running out of air while underwater. To recover her health, Lara can use Small and Large Medipacks from her inventory. Medipacks are found scattered about levels. Lara keeps all items (Medipacks, weapons, and ammo) from one level to the next, so excess supplies gathered early in the game can be saved and used later in the game as it becomes harder, at least until all of Lara's items are reset in the last chapter of the game for story reasons. Lara also starts each new level with her health restored to full.

Some hazards can kill Lara even at full health, such as falling into a spike trap, being flattened by a rolling boulder, or being caught by a boss's grapple attacks. Upon death, the player must reload a saved game to resume playing. There are no auto saves, so the only saves to reload are ones the player has made manually.

To save one's progress in the game, the player must use a Save Crystal in the Saturn and PlayStation versions of the game, while in PC and Mac versions, the player may freely save anywhere. Save Crystals are relatively sparse throughout the game, with each level having only a few, and the scarcity of saving is one source of the game's difficulty and tension.

Tomb Raider was widely lauded by the public and press, going on to sell an astonishing 8 million copies. The cutting edge graphics, atmospheric levels, stylish gameplay, cinematic presentation, and almost unheard of use of a female protagonist captured the public's attention. The game was a huge financial success that turned Eidos Interactive's financial woes around over-night. Lara Croft herself became an icon even outside of video games, appearing on magazine covers and eventually branching into Hollywood. Two Tomb Raider films were made featuring Angelina Jolie as Lara Croft.