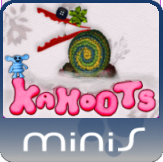 Kahoots is a puzzler in  Lemmings fashion, where small mouse-like characters, the kahoots, traverse an obstacle-laden path to find cakes and their freedom.  Though the player exerts no control over the mindless kahoots, blocks along its journey can be shifted to lead them around spikes and the cardborg monsters.  Levels grow in complexity through the game adding trapdoors, cannons and more to prevent rescue of the kahoots. There are a total of 50 levels in the game which you can play in any order you choose. They range from very simple to quite challenging and some can take you a surprisingly long amount of time to figure out and complete. However completing levels by themselves isn't the biggest challenge in the game, it's completing them while collecting all the cupcakes scattered throughout each level that can take some real effort. Almost every level is guaranteed to have a couple cupcakes for you to try and collect. These can make levels that seem fairly simple actually quite a bit more challenging as you try to figure out ways to collect the cupcakes without being killed.

The game features an almost collage-like art style, notable in the Pegbeast, which introduces new gameplay elements in quirky songs.