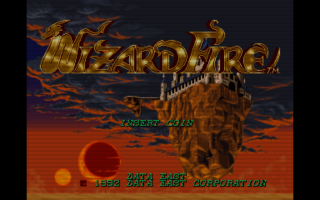 A fantasy isometric hack-and-slash arcade game and the sequel to the 1990 game Gate of Doom.

Wizard Fire (known in Japan as Dark Seal II) is a high-fantasy isometric hack-and-slash game developed and published by Data East for arcades in 1992.

A sequel to the 1990 game Gate of Doom, Wizard Fire is set in the year 355 in the Empire of Gaul, where the "Shining Knights of the Wizard Fire" are chosen to prevent a dark sorcerer from unlocking the Dragon Shrine to raise a massive army of undead. While the Knight, Wizard, and Bard from the original game return, the game includes three new playable characters: dwarf Jade Greataxe and elf Eminna Jozestore.

The arcade version of the game later received two ports after Data East's bankruptcy: one for the 2010 Wii compilation Data East Arcade Classics, and a standalone digital release for the Nintendo Switch. The Switch version was released by Flying Tiger Entertainment on June 21, 2018, as part of the Johnny Turbo's Arcade series, and was later included in the compilation Retro Classix Collection 2-in-1 Pack: Gate Doom & Wizard Fire on August 27, 2020.

The class types to choose from are wizard, bard, knight, elf or dwarf. Each of the heroes has a unique standard attack, access to magic and one passive ability. The wizard does maximum magic damage, the bard is resistant to poison, the knight is immune to disease, the elf has increased mobility and the dwarf is resistant to confusion. Unlike the previous game, magic attacks are not unique to each class, though specific characters have a higher chance of using certain attacks. There is also the chance, for any class except the wizard, that the spell will fail and you will transform into a pig for a short time.