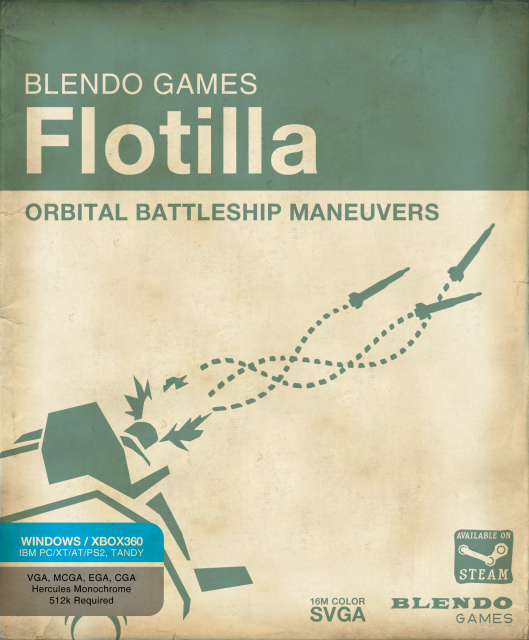 Flotilla is a turn-based space combat game that takes place on a 3d plane, reminiscent of Homeworld. Produced by Blendo games, it is available on Xbox Live Indie Games and PC.
Xbox 360 Games Store

Flotilla is a space combat game in which fleets of spaceships duke it out on 3D maps, allowing for a greater range of movement and strategic movement. It features quirky characters, a clean and simple art-style, and simultaneous turn-based action. This game is now available for 400 microsoft points on XBOX Live indie games and 10 dollars from the developers website and Steam.

Flotilla is a simultaneous turn-based strategy game, in that both you and your opponent queue up your moves for the next round, and both are executed at the same time. The game takes place on a 3D plane and a core tactic will be flanking your enemies not only from the side, but from beneath them as well. The armor on ships is generally weaker on in the rear and bottom.

In the combat, fleets square off against each other in a map. You will at first be asked to pick a movement style for each of your ships. These include:

The player then chooses the position (horizontal and then vertical) of the ship. The ship is then given an ending orientation. Finally, the ship is given a priority target to try to attack. Once all ships have orders, the turn ends and the orders are carried out.

Maps consists of various asteroids and space debris, which can be used as cover.

There is also an exploratory portion of the game, where the player moves the fleet to various planets and celestial bodies. At these locations, players can find loot and wacky pilots (including a panda!) to improve the fleet.

There are two gameplay modes in Flotilla, Skirmish and Adventure.

Skirmish mode is an all out battle mode where players choose their enemy's fleet as well as their own and head straight into combat, and can be played against the computer or a friend (on the same system, the game does not appear to have online play).

Adventure mode is a randomly generated story campaign, in which everything from the story elements to the pilots you encounter are randomly generated. The developer promises that no two adventures will be the same. In this mode, you can collect loot to upgrade your fleet of ships. Adventure mode can be played single-player or co-op split-screen.

There is a modest roster of ships at the player's disposal is Flotilla.

These small ships move very quickly and do moderate damage. Their downside is their slow projectile speed and low overall health. These ships are no match for Beam Ships on head-to-head assaults, and are best used as the flankers of your flotilla.

Like a Beam Gunship, but it has only one turret in its front, restricting its firing range to targets that are ahead of the ship.

A slim Gunship with a moderate speed. It is used to charge head-first into other ships' space and decimate them with its powerful beam laser. The beam laser has the downside of having a limited range, but can attack enemy ships all around, no matter of orientation.

The "turtle" of the ships in the flotilla, this armored beast is primarily used to draw enemy fire. It travels slowly and fires very slowly, but each torpedo fired does more damage than the Destroyer rockets.

These massive ships are the most potentially devastating ships at your disposal. They fire numerous torpedoes with each burst, each dealing very heavy damage. They also fire machine-gun-type fire in two directions at high velocity. They have two turrets on their armored top, and one on their unarmored bottom side. They move very slowly, and can be easily flanked if not careful.

These secret little ships are given to you for your kind service to the galactic community. They are armed with beam lasers and have almost non-existent health. They move quickly, which is useful when you're trying to save these things from imminent destruction.

These are the tanks of the beam ships. They move slower than the Beam Frigate or Beam Gunship, but can deal twice as much damage once they get in range. Their beam turrets are forward-mounted, so targets must be towards the front of the ship to take any damage. Their bottom is completely unarmored.