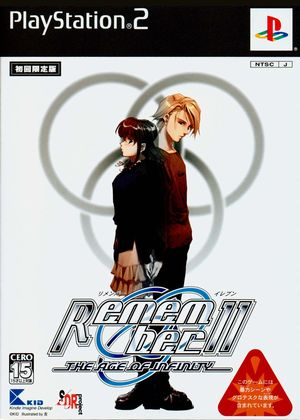 Remember 11: The Age of Infinity

Remember11 is a visual novel developed by KID and is the 4th entry in the Infinity series.
PlayStation Portable PlayStation 2

Remember11: The Age of Infinity is the fourth entry in the Infinity series of visual novels developed by KID. The game was originally released on the Playstation 2 on March 18, 2004 and was later ported to the PC in 2008 and PSP in 2010 by CyberFront. A majority of the Infinity series have not been officially released in English, the only exception being Ever17. However the visual novel translation group, TLWiki, did release a fan made English patch for the PC version of Remember11 on October 11, 2010.

Like its predecessor Ever17, Remember11 features two protagonists: Kokoro Fuyukawa, a college student majoring in Sociology, and Satoru Yukidoh, a Quantum Physics graduate student. When playing the game for the first time, the story is told from Kokoro’s perspective. After finishing the game once as her, Satoru’s chapter is unlocked.

The story of Remember11 is set during the week of January 11 through January 17 in both the years 2011 and 2012. The opening scene shows Kokoro on a plane bound for Aosagi Island. It is there that she plans to visit the Specified Psychiatric Hospital for Isolation and Aegis (SPHIA) to interview Keiko Inubushi, a teenage girl who was accused of killing 12 people and injuring 19 in a hospital only to be acquitted by reason of insanity for allegedly suffering from Dissociative Identity Disorder (DID). During the flight, Kokoro meets Yuni Kusuda, an 11-year-old boy. Meanwhile, Satoru is climbing to the top of SPHIA’s clock tower. The plane that Kokoro and Yuni are on begins to experience turbulence and crashes into the snowy Mount Akakura. The prologue ends with Satoru falling from top of the clock tower and losing consciousness on the ground below.

When Kokoro wakes up, she finds herself in a bed in an unfamiliar room. Tending to her is Kali Utsumi, a woman she’s never seen before. When Kokoro introduces herself, Utsumi is confused and lashes out at her, saying that Kokoro Fuyukawa is dead and that she won’t get in the way of her plan. When Kokoro explores the building she is in, she not only encounters Keiko Inubushi but also Yuni who is alive and well. Yuni tells Kokoro that he doesn’t recognize her. When Kokoro looks in a mirror she discovers that she is in the body of an unfamiliar man.

Elsewhere, Satoru awakes in a small cabin. There are three other people in the cabin with him: Seiji Yomogi, an older man who looks like a hiker, Lin Mayuzumi, Satoru’s ex-girlfriend, and Yuni, who’s strangely here too. Mayuzumi doesn’t recognize Satoru when he tries to talk to her and upon looking at his own reflection in a window, he learns that he is in a woman’s body.

Satoru and Kokoro eventually switch back to their own respective bodies. It doesn’t take long for the two to realize that their consciousnesses are periodically trading places. Satoru’s body is in SPHIA on Aosagi Island while Kokoro’s body is in an emergency refuge cabin on Mount Akakura following the plane crash. They each leave notes and voice recordings for the other to find when the body transfer occurs to help each other in figuring out what’s going on. Satoru and Kokoro don’t understand why and how Yuni could be in both places at the same time and initially believe him to be teleporting or something to that effect. Satoru determines that he and Kokoro are not only transferring their consciousnesses across space, but also across time with the cabin being in 2011 and SPHIA in 2012. What bothers Satoru, however, is the fact that he always sees the Moon in 2012’s lunar phase regardless of if he is at SPHIA or the cabin. The other characters dismiss their claims of being the other person as the effects of DID. Additionally, Inubushi claims her name is Hotori Suzukage. Hotori is assumed to be one of Inubushi’s personalities.

Over the course of the week, the situations in SPHIA and the cabin grow dire. With the blizzard outside showing no signs of letting up, the crash survivors run out of food and firewood, soon resorting to burning furniture. In SPHIA, there is someone trying to kill Satoru. The culprit attempts to stab, poison, and even drown him in the bathtub. At the cabin, a newspaper article dated July 4, 2011, six months in the future, is found. The article details the recent finding of three corpses presumed to belong to Yomogi, Mayuzumi, and Kokoro. It was determined that the three died in an avalanche on January 17 with Yuni being the only survivor. Satoru finds a magazine in SPHIA confirming this information.

In the basement of SPHIA, Satoru discovers a room with monitors that appear to be watching over the whole facility. Satoru meets a man in this room who introduces himself as Naoya Enomoto. Enomoto explains the entire body transfer phenomenon to Satoru. It is not their consciousnesses that are transferring but rather the entire space within a 110 meter radius of the shelter cabin and SPHIA. This means that when the exchange occurs, SPHIA is on Mount Akakura and the cabin is on Aosagi Island explaining why Satoru saw the Moon in the same position in both locations. Finally learning the cause of what he and Kokoro have been going through, Satoru attempts to destroy the space-time transfer machine but Enomoto pulls a knife on him. A transfer occurs during the fight and upon returning to SPHIA after another transfer, Satoru finds Enomoto lying dead in a pool of blood with many stab wounds. Satoru is in disbelief that Kokoro could be capable of this.

After his body went on a rampage throughout SPHIA when he wasn’t in control of it, Satoru watches the surveillance footage of the incident in the basement room. It’s then that he notices the times of the transfers don’t match up to the ones he recalls. This causes Satoru to realize that there is actually a third participant in the space-time transfer meaning Kokoro wasn’t responsible for Enomoto’s death and the rampage. Near the cabin, Satoru discovers the body of one of the plane passengers. According to her identification, her name is Hotori Suzukage. Unbeknownst to Satoru, she is not dead yet. It can be concluded that Hotori and Inubushi are switching bodies as part of the space-time transfer. When Kokoro is Satoru’s body, Hotori is in Inubushi’s and vice versa. The true Keiko Inubushi is only seen when playing the game from Satoru’s perspective. So when Satoru discovers the real Hotori’s body, Inubushi’s consciousness is occupying it at the time.

Kokoro and Satoru eventually learn that Yomogi and Utsumi were married. The two had a son named Junichi who was killed on his 10th birthday in the hospital killing spree allegedly carried out by Keiko Inubushi. Utsumi tries to kill Inubushi but is stopped by Satoru. It turns out that Utsumi’s entire reason for coming to SPHIA was to exact revenge for her son’s death. Yomogi and Utsumi also have two fraternal twin babies who were born in August 2011. Utsumi reveals to Satoru that while she was pregnant a month prior in July, she spent some time in the underground basement of a place called Hotarubi.

One detail revealed later on is that the Yuni at the shelter cabin is from 2012 and the Yuni at SPHIA is from 2011. After surviving the plane crash in 2011, Yuni unknowingly wandered outside of the shelter cabin transfer radius and made his way into the SPHIA circle. The other Yuni (from 2012) intentionally left SPHIA to go to the cabin, bringing with him the newspaper article from July 2011 detailing the crash survivors’ deaths. He then led Kokoro, Yomogi, and Mayuzumi to the cabin.

Satoru waits just outside of the 110 meter radius of SPHIA for a transfer to occur. Looking at a map, he determines the third transfer location by finding the exact middle point between Mount Akakura and Aosagi Island. The middle point is located at Hotarubi mine and Satoru is shocked as he now has an idea of who the third person involved in the transference phenomenon is. When the next transfer finally occurs, Satoru can now enter the mysterious third location which will help explain some details of the plot, albeit resulting in a “bad” ending.

After another transfer, Satoru finally meets Kokoro, Yuni (2012), and Mayuzumi face-to-face outside of the circle. Strangely, Yomogi is not with them. Satoru and Kokoro return to SPHIA to find that Utusmi, Inubushi, and Yuni (2011) aren’t there. Satoru checks the surveillance footage in the basement and learns that the three left SPHIA shortly after he did. It’s then that Satoru reaches a startling realization – two of the three corpses found in July 2011 as described by the newspaper article did not belong to Kokoro and Mayuzumi but rather Inubushi and Utsumi in addition to Yomogi. Yomogi had left the cabin in search of Kokoro earlier but missed her. When Kokoro returned and learned of this she left to find him and ended up running into Satoru. After SPHIA is transferred to Mount Akakura, Satoru and Kokoro brave the intense blizzard and manage to save Utsumi, Inubushi, and Yomogi from the avalanche that would have otherwise claimed their lives. Yuni (2011) is left at the shelter cabin to be found by rescuers and eventually continue his infinite loop.

The cast stands on the shores of Aosagi Island in 2012 and Utsumi has her twin babies with her. Satoru discusses the events of the past week with Kokoro and Yuni. While Satoru believes the harmless consciousness of Hotori currently inhabits Inubushi’s body and Inubushi’s consciousness died along with Hotori’s body, Kokoro isn’t satisfied with that explanation. She recalls that each consciousness was always tied to a specific area meaning that the Hotori she knew is in her own respective body, deceased at Mount Akakura. As she realizes this, Inubushi is seen standing at the edge of a cliff singing to one of Utsumi’s babies with a malevolent smile on her face. After Kokoro suddenly runs off, Satoru approaches Mayuzumi, making it the first time they will speak to each other since returning to his own body. Mayuzumi stares at Satoru with disdain when he attempts to strike up a conversation with her. In the final scene of the game, Mayuzumi accuses Satoru of not being the Satoru Yukidoh that she knew and Satoru stands flabbergasted, completely speechless.