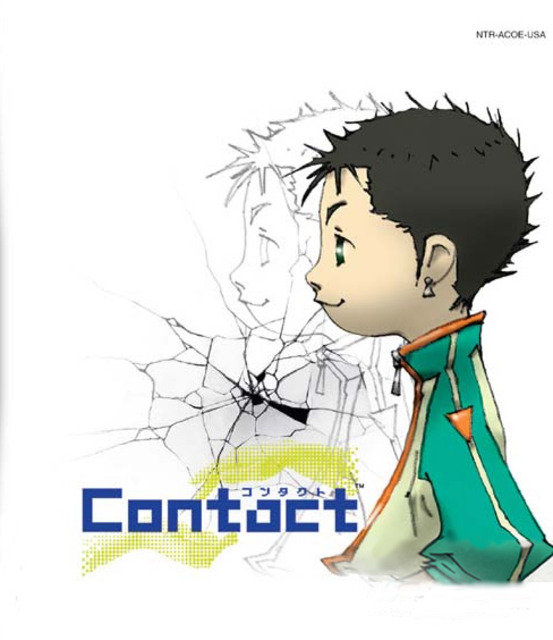 Let The Professor guide you as you control Terry, an average boy who is unaware of your existence. You lead him in the search for cells to repair the Professors ship.
Nintendo DS

Contact is an adventure game/rpg developed for the Nintendo DS by Grasshopper Manufacure and published by Marvelous entertainment. The game centers around The Professor who is fleeing a mysterious enemy, known as the CosmoNOTs, and his young assistant Terry as they collect the necessary spaceship parts to get The Professor's ship running. Good humor and strong RPG elements are found throughout the game along with two distinct art styles. The game uses the player as a omnipotent character that helps guide Terry. This frequently leads to characters breaking the fourth wall for comedic effect or to give the player hints.

The two main characters interact with the player differently throughout the game. The Professor speaks directly to the player and gives clues for the game. He is displayed on the top screen in a pixelated art style. Terry is a character that players "guide" around the bottom screen and explore the world with. The bottom screen displays a more hand drawn art style.

Terry can change jobs during the game by changing his costume between 8 different outfits. These outfits will give Terry different stats along with access to different abilities. An integral part of the gameplay is to use different costumes to find enemies' weaknesses.

Along with standard attacks and magic attacks, the player can use decals to aid Terry. Decals are typically one time uses (or with a cool down period) that can perform various actions such as improving stats, healing, and damaging enemies.

The game uses a stat leveling system where a stat will level with the frequency that it is used. The story is about 10-15 hours long.