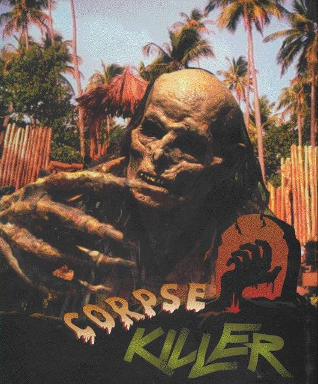 Corpse Killer is an FMV rail shooter released for Sega CD32x, 3DO and Sega Saturn in 1994. Released with the subtitle 'Graveyard Edition' on the Saturn.

The game begins with the main hero - a soldier landing on a strange island. His parachute gets stuck on a tree. While trying to get down he is attacked and bitten by a zombie. The hero is then rescued by Rastafarian that becomes your guide on the island. Using transceiver he finds that his comrades were captured and massacred by a crazy scientist creating a zombie-solider arny. the original mission was to stop him but the goal quickly turns to that of survival. The hero is slowly turning into zombie and the only way of survival is finding an antidote.

Unlike much of Digital Pictures's lineup the movie and the gameplay are not synonymous. Rather there are clear "gameplay" sections as well as video segments. The "gameplay" portion of the game consists of a scrolling scene where players must shoot zombies before they reach them.