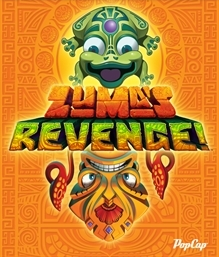 A sequel to the fun and wildly popular 2003 PC hit casual game Zuma from PopCap Games in which players aimed with their reticule to line up colors and get rid of the balls on screen. This new sequel features an improved sequel to the game, replete with several new modes and features, such as a challenge mode, boss battles, new power-ups and nearly 60 new maps.

Zuma's Revenge is a puzzle game developed and published by PopCap Games for multiple platforms. The Mac port of the game was developed by Robosoft Technologies while the Zeebo port was developed by Vega Mobile.

The object of the game is to clear a string of balls by matching three or more balls of the same color. The balls will roll along a path on the screen and it is up to the player to prevent them from reaching the end of the path.

Players control a frog that is situated somewhere on the level and is given a random colored ball. Players can control where the frog is aimed and fire at the string of balls. When three or more balls of the same color are touching, they will disappear and points will be gained.

Once a certain score is reached in each level, the balls will stop coming and players will need to clear the rest in order to beat the level.

It was announced on March 20th, 2012 that Zuma's Revenge would be released on Xbox Live Arcade. The Xbox Live port will contain more modes, updated graphics, achievements, and leaderboards.