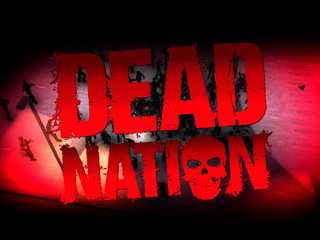 Dead Nation is a top-down, dual-analog shooter exclusively for the PSN developed by Housemarque, the developers of the similar smash-hit PSN title Super Stardust HD. The game takes place in a world overrun by a zombie apocalypse. Playing as either Jack McReady or Scarlett Blake, who are both immune to the virus, the goal is to escape the city alive and help find a cure to the virus sweeping the globe. In order to escape in one piece, Jack and Scarlett will have to fight through hoards of the zombies in a city teeming with the undead, some of which have evolved and mutated into more dangerous creatures. The story is told between levels using still frames and narration in a style similar to a graphic novel.

The game features ten levels, all of which can be played in either local or online two-player cooperative mode.

As the game supports both local offline two player co-op and online two player co-op via PSN, the player has two choices of characters that share identical stats. While the story is the same for both characters, your choice determines the narrator during the cutscenes. When playing cooperatively, Jack and Skarlett alternate as narrator, and the narrative replaces all instances of "I" with "we" and other similar edits.

Dead Nation plays very similarly to Super Stardust HD. While the left analog stick moves your character, the right analog stick is used to aim. The R1 and L1 buttons are reserved for shooting and throwing items, while the R2 and L2 buttons are used for melee attacks and a rush/dodge move. The game encourages you to keep up a score multiplier by killing zombies, finding special items and not getting injured. This multiplier increases the amount of money you get from each kill, as well as the amount of money you can find in containers and car trunks around each level. This money can be used to buy upgrades for your guns and throwable items, such as power, fire rate and magazine size for guns and damage radius for throwable items like grenades. While your armor affects your melee damage, damage resistance and speed, your armor cannot be upgraded with money. Instead, pieces of armor with different stats can be found in each level that you can mix-and-match according to your style of play.

Some of the games weapons include:

Savvy players can employ various strategies to aid their onslaught of the undead hordes. Flares and car alarms can be used to attract zombies and distract them. Sustained damage on these vehicles will cause them to explode and incinerate any enemies in the nearby blast radius, which can prove to be helpful when dealing with large crowds.

Dead Nation also features a dynamically-updated global leaderboard (in addition to traditional local leaderboards) which pits countries against each other in a "who can kill more zombies" competition. Every kill a player makes will add to their countries total. When a certain number of kills has been reached, a new "infection cycle" will begin. Players will be notified of any changes to the leaderboards via the news-style ticker tape which runs at the bottom of the screen's front end menus.