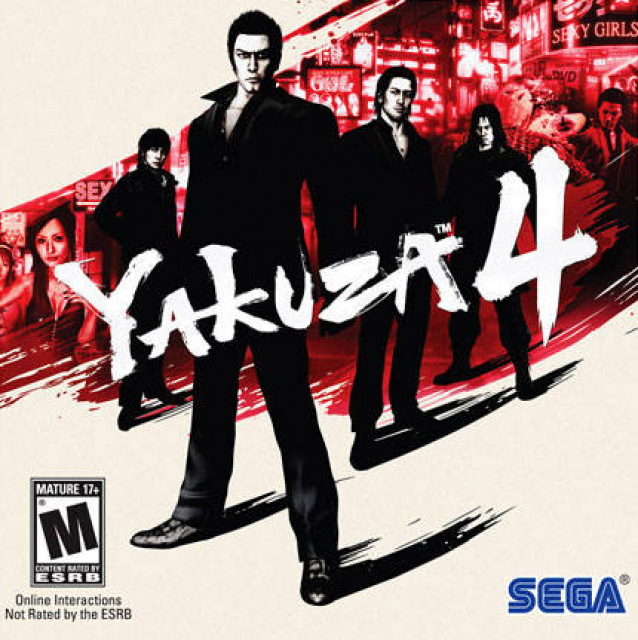 Yakuza 4 is the fourth game in Sega's crime drama series, known as 'Ryu ga Gotoku' in Japan. As a first for the series, the story is split between the viewpoints of four different protagonists.
PlayStation 3 PlayStation Network (PS3)

Announced on July 24th, 2009 and released on March 18th, 2010, just a week after the western release of its predecessor Yakuza 3, Yakuza 4 is the latest entry in Nagoshi Toshihiro's wildly popular (in Japan, at the least) series following the lives and exploits of a 'family' of Yakuza mobsters in a semi-fictional version of Kabukicho, Tokyo's red-light district in Shinjuku (called "Kamurocho" in the games). Like previous games in the series, the gameplay is a mixture of open-world exploration with lots of diversionary mini-games and side-quests, RPG style dialogue and random battles, and 3D brawler-style combat with RPG stat-leveling elements, like a real-time action RPG.

It also features a multiple protagonists system, in a similar manner to the later 2013 title Grand Theft Auto V. Compared to Grand Theft Auto's exaggerated Hollywood movie pastiche, however, Yakuza 4 instead aims for realism and authenticity, based on the activities and operations of real Yakuza gangs.

Yakuza 4 stays true to its roots and provides a similar experience to that seen in the previous titles. As any of the 4 characters, you can freely explore the world at any point in the game. There is much to do in Kamurocho, such as:

Battles in Yakuza 4 are similar to that of a JRPG, whereas you come across random encounters with enemies and gain loot and EXP once you defeat them. During the battle players can freely move about and attack. Attacking raises a meter called the "HEAT bar" which will allow devastating finishing blows to be executed once it's filled. The player can also grab any object that has an icon over it and use it as a weapon. Throughout the game, each of the 4 characters will gain new moves and abilities to use in combat. Seeing as there 4 characters to choose from, there are 4 styles of fighting, each of them unique and brutal.

A feature missing from the previous Yakuza 3, hostesses are back through demand from the fans. Players can access any of 3 hostess clubs at any point in the game (excluding Saejima). Upon entering, the game shifts to a "dating-sim" style, where the player must cater to the hostess's tastes, ordering food and drinks that she prefers, and answering her questions carefully. The player can also go and buy gifts for the hostess in order to raise their relationship level. Once at a certain level, the hostess will ask you to accompany them on a date.

There are a total of 23 minigames in Yakuza 4, some of which are not immediately noticeable on the map. This is a complete list as well as their locations.

**As a side note the original Boxcelios Arcade game is locked from the start, to unlock it simply make friends with the Club SEGA employee, you can only do this with Akiyama and is done by spending enough money in any Club SEGA, just play Boxcelios 2 a couple of times (about 2-3 *full* games, don't start then quit), he will then unlock the original Boxcelios in both Club SEGAs and for each character.

To continue the trend of an evolving framework, Yakuza 4 also contains a few new additions to it's system and open environments. "Memo's" are now spread across Kamurocho, identified by pedestrians with blue arrows above their heads. These serve as introductions and reminders to in game features and tutorials for certain aspects not fully discussed through the games progression.

The next addition is the debut of Rooftop exploration, before in the series they were used as combat locations, but now the player may actually traverse using them by accessing specific locations. They also contain hidden Memo's and technique Revelations as well as Saigo's Combat Training.

The story of Yakuza 4 kicks off on March 1st, 2010, when a gunfight in Kamurocho leads to the death of Hiroaki Arai, the boss of the Kanemura family, an affiliate of Kamurocho's dominant Tojo Clan. This seemingly isolated incident unravels into a huge conspiracy set in motion by forces who wish to control the fate of the entire Tokyo underworld.

Unlike previous games in the series, which exclusively followed the actions of ex-Yakuza heavy Kazuma Kiryu, Yakuza 4 splits its storyline between four different playable characters, between whom control is switched throughout specific parts and chapters of the game. They are all involved in the same incident in different ways. In addition to Kazuma, the other three playable characters are as follows:

Formerly a homeless bum, Akiyama collected a large amount of money from the explosion at the Millenium Tower at the end of the first Yakuza game, and invested it, ultimately becoming a money-lender. In this way, he has accrued a large amount of wealth but his choice of clientèle has apparently gotten him into trouble - at the beginning of the story, he is arrested for suspected involvement in the March 1st shooting.

A greasy dirtbag and tough Yakuza hitman who was imprisoned in 1985 for a killing spree where he walked into a ramen bar and murdered eighteen men from a rival gang. This incident seems to be a major factor in the conspiracy around which the story of the game revolves - while in the slammer, Taiga meets a Tojo member who informs him of the recent shooting, prompting him to break out and begin an investigation of his own.

A rather unscrupulous Tokyo cop, Masayoshi is known to be involved in the illegal gambling scene (he takes bribes from illegal gambling dens in exchange for not turning them in). He became disenchanted with life in the force after a case tying his father to a local Yakuza boss.

Kazuma is the former 4th chairman of the Tojo clan. Thought to have left Kamurocho for good, he now runs an orphanage in Okinawa. However, a recent string of events causes him to get caught in the conflict and he finds himself back in Tokyo's underground once again.

As of February 7th 2011, Sega has announced that Yakuza 4 will come packed with a free DLC code with every new copy. Inside the exclusive content is:

The content was originally bundled in the PAL releases of the game as part of their Kuro and Shiro packages.