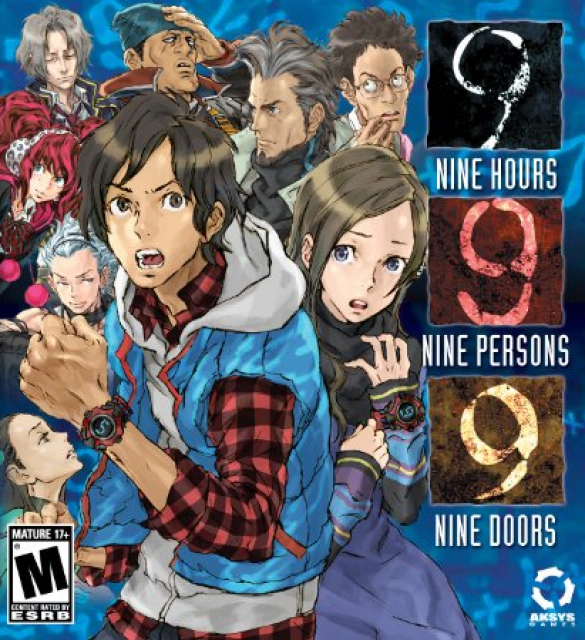 Decide the fate of the 9 kidnapped people who are trapped on a ship and forced to play the Nonary Game, where players put their life on the line.
Nintendo DS

Nine Hours, Nine Persons, Nine Doors (999 for short) is a visual novel / adventure game developed by Chunsoft for the Nintendo DS that was published by Spike in 2009 for Japan and by Aksys Games in 2010 for the United States. 999 is the first game in the Zero Escape series, and has a sequel, Zero Escape: Virtue's Last Reward. In 2013 an iOS version of 999 was released in Japan and later in western territories in 2014 that removed the "escape the room" sections for people to focus on the story. Also included in the mobile re-imagining were higher quality sound and visuals.

A college student named Junpei is "invited" to play a game called the Nonary Game. The person in charge of this game is a person wearing a gas mask, who calls themselves Zero. The game takes place on an old cruise ship. There are 9 people playing the Nonary Game, and they have to pass through numbered doors to get to the exit, marked with a 9. The time limit is 9 hours, after which the ship sinks.

If the players do not follow the rules and conditions of the game, they also risk death from a small ingested explosive. Forced to cooperate to progress through the game, the "players" discover their connections and shared history.

This is an adventure game that plays out like a horror novel. 999 is extremely story intensive, but there are some different gameplay types for progression. The player will have to solve up to 32 puzzles and make decisions that decide whether Junpei and his fellow captives will be successful. There are a variety of puzzle types in the game, but most are based on logical thinking. The objective of every puzzle is to escape from the room Junpei is currently in.

There are also life simulation elements that will have Junpei building relationships with other players of the Nonary Game. Choices he makes in these dialogues affect how will the game play out. The game cannot be completed in only one playthrough, as the player will have to gather information from the bad endings in order to make the right decisions. In total, there are 6 endings, of which only one is the true ending.

Each of the nine players is equipped with an nondetachable bracelet, with numbers from 1 to 9 respectably. To pass through the numbered doors, the players have to match the digital root of a door. The digital root is calculated by summing the numbers on the bracelet, and then summing the digits of the calculated number until the final number consists of a single digit. For example, the digital root of these numbers is the following: 2+6+7+8 = 23 -> 2+3 = 5. That means that the players with the numbers 2, 6, 7, and 8 will be able to pass through a door with number 5 on it. However, only 3 to 5 people can pass through a numbered door, and all bracelets used to enter a door have to be verified once more after passing through the door. When the door is being used, the rest of the players are not able to interact with it. A player who did not verify isn't allowed to enter the numbered door.

Most of the characters use code names, as they are scared of possibly revealing their identities to Zero.

On May 29th, 2013, a new version of the game was released in Japan on iOS devices, entitled 999: Smart Sound Novel. This new version completely removes the puzzle sections found in the original version and presents the game more as a comic book, with high resolution character portraits and speech bubbles to present the story. This version also allows the player to jump through timelines in the story at any time, a feature that was present in Virtue's Last Reward.

This is the second iOS port to be released under Chunsoft's Smart Sound Novel series. The first was Night of the Sickle Weasel, a game that Kotaro Uchikoshi cited as a major inspiration for the Zero Escape series.

Uchikoshi revealed on his twitter account that a possible English version of this iOS port would be released as early as Fall 2013. This was released on March 17th, 2014.