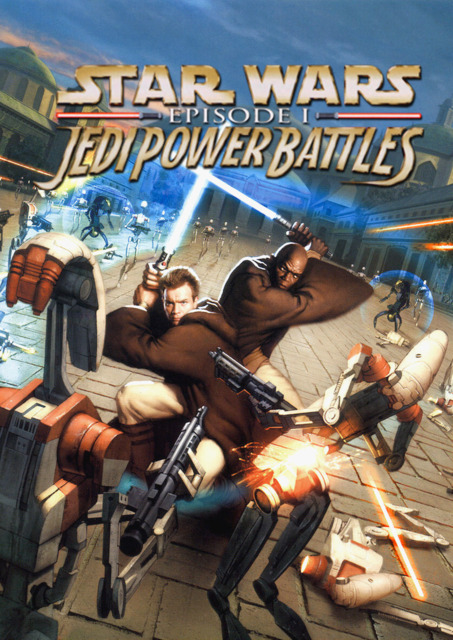 Jedi Power Battles is a game from LucasArts where players play through some of the more explosive events from Star Wars: The Phantom Menace.
Game Boy Advance

Star Wars Episode I: Jedi Power Battles was released on the Playstation on March 31, 2000 and later on the Dreamcast. It takes place within the events of Episode I: The Phantom Menace. The game is an action beat-em up with platforming elements and the games levels are set on the worlds of Naboo, Tatooine, Coruscant, and a Trade Federation Battleship. There are a number of playable characters including Obi-Wan Kenobi, Qui-Gon Jinn, Mace Windu, Adi Gallia, and Plo Koon.

Made by LucasArts, Jedi Power Battles was released shortly after the direct movie tie-in; "Stars Wars Episode One; The Phantom Menace". Unlike this previous game, the focus is almost entirely on action, and the game's 10 levels take the form of memorable battles that are loosely based on locations and events from the film. The game also has a basic levelling system, based on how many points you're able to amass playing each level. You're able to upgrade both your health, and the amount of force power energy you have.

The game lets the player take control of five Jedi from the era of episodes 1-3, each with their own special Force abilities. These Jedi, and their starting special abilities are as follows:

You can also unlock more characters to play as:

Most of the characters have a lightsaber as their primary weapon (the exceptions being Amidala and Panaka). As the game is more action based than the official movie game, the combat system is made paramount. The player can lock onto an enemy, and then use combo attacks to defeat them. Lasers can also be deflected using the lightsaber by timing the block button just as the blast is about to hit you.

The original PlayStation release received mediocre scores by critics, but it should be noted that the Dreamcast version added a significant amount of bonus content, going beyond being a simple port. The Dreamcast version featured improved graphics, a new front-end menu, a competitive multiplayer duelling mode that allowed you to play as nearly every character in the game (including enemies), an additional training mode, as well as alterations in gameplay to moderate the difficulty level.