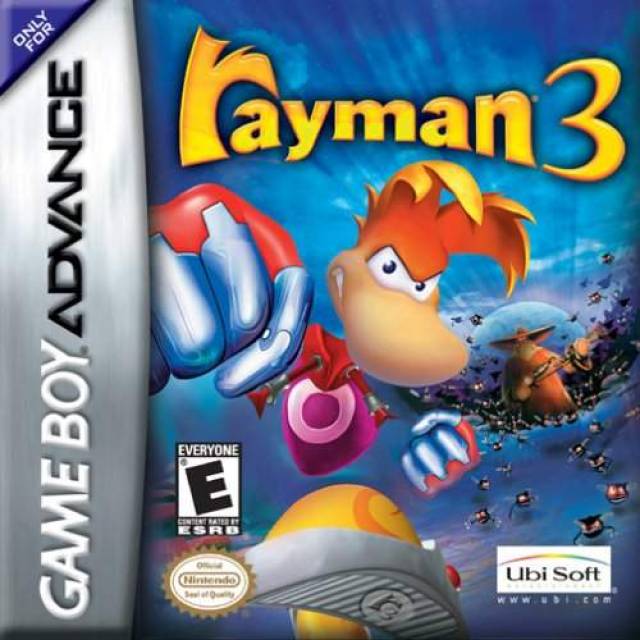 Released alongside Rayman 3: Hoodlum Havoc, the game eschews the 3D platforming and humorous tones of its console brethren in favor of traditional 2D platforming in the style of the original Rayman.
Game Boy Advance

The plot of the handheld adaptation loosely follows what occurs in the console versions of Rayman 3. However in this version it appears that Captain Razorbeard and the pirates attempt to harness the power of the black lums to conquer Rayman's world. Much of the music, level scenery and enemies present suggests that this may have originally been conceived as an adaptation of Rayman 2 The Great Escape. Gameplay flows similarly to the original Rayman on 32-bit platforms but features powers and moves from Rayman 2 and Rayman 3. However none of the power suits from the console version of Rayman 3 appear in this game. Instead they would appear in a later handheld adapation called Rayman - Hoodlum's Revenge.

The base version of the handheld edition Rayman 3. The game features multiplayer for up to four players using either Single or Multi Cartridge connectivity. The game can also be connected to the Nintendo Gamecube version for additional challenge levels.

Gameloft, Ubisoft's mobile games division, ported Rayman 3 to Nokia's N-Gage soon after the Game Boy Advance release. The N-Gage version is exactly the same has the Game Boy Advance version, however it lacks the Mode 7-based 3D levels and (unsurprisingly) features no GameCube connectivity. However, the N-Gage release featured online and local multiplayer by either Bluetooth or now defunct N-Gage arena. The N-Gage release of Rayman 3 was well received by critics and is one of the highest rated N-Gage games ever to be released.