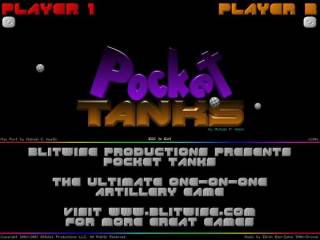 Pocket tanks is a 2D strategy game, which features similar gameplay to that of worms.

Pocket Tanks is a 1 or 2 player computer game for Windows and Mac OS X, developed by Blitwise Productions. Adapted from Michael Welch's earlier Amiga game Scorched Tanks, this newer version features real world physics, over two hundred, and the ability to move the tank. It supports several expansion packs. At the moment, players can have up to 210 different weapons total.

First, the players are taken to the "weapon shop", where they take turns picking weapons. 20 weapons will be randomly chosen from all the installed weapons(including purchased weapons). Two tanks, one always a human and one can be played with AI or a friend, lob shots at each other at a turn basis. Each weapon can only be used once. Different weapons have extremely varying effects. These effects generally are:

By not having a health system as in other 2D strategy games, it gives the game more depth and balances the game further. It also ensures that all weapons the player has will be used as the game only ends when all the weapons have been used.

This totals 210 weapons, 30 from the demo version and the remainder in these packs

Network play has been made available with the latest (v1.3) release. Actual online play will be developed in the future, although it is possible to simulate this through Hamachi or other similar programs. A hidden IP-to-IP mode can also be enabled by editing a settings file. It is accessible by changing the text file called pt in the my games folder in my documents. This is only a basic online service, allowing only direct IP connections .