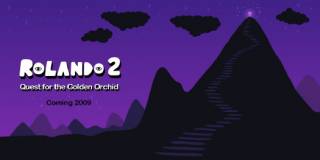 Rolando 2: Quest for the Golden Orchid

A sequel to Rolando on the iPhone coming out June 2009.

Rolando 2: Quest for the Golden Orchid was announced on March 23rd 2009 and is set to be released in June 2009. It is going to be released on the iPhone as a sequel to the original Rolando. It will feature four worlds, containing a total of 36 levels. There are plans for post release support, which will be in the form of four updates, each featuring five new levels, similarly to the original Rolando. Neil Young, the founder of ngcomo stated that "In eleven months, we will have released 12 worlds, 149 levels, 40 hours of gameplay for less than the cost of a single DS or PSP game".
LocoRoco LocoRoco 2 Lemmings LocoRoco Midnight Carnival Puddle